Building a new terminal for a major metropolitan airport is much more involved than all that’s happening above ground. Construction of a new single terminal at Kansas City International Airport (KCI) includes miles of fiberoptic cable, power lines, and fuel lines being installed underground to serve thousands of travelers every year.

With a price tag of $1.5 billion, KCI is the largest single infrastructure project in the city’s history. Voters in Kansas City approved funding to replace three terminals at KCI (airport code MCI) with a single structure that will have more than 1 million square feet of space and include 39 gate areas and amenities associated with a large airport.

You can’t see the work we’re doing to bring the new terminal online. But let’s just say without our expertise airplanes would have a difficult time leaving the airport.

Our Olathe Nondestructive Testing team is using gamma radiography to inspect the fuel lines that go to the airport for U.S. Engineering, one of the project’s subcontractors. Gamma radiography uses ionizing radiation to inspect materials for defects. Our team takes radiographs of all the welds in the fuel lines, develops the film onsite in our mobile lab, and then reviews the images to see if there are any issues with the welds, such as cracks or lack of fusion.

During the first phase of construction, we tested about 200 field welds. Phase two will include more than 800 field welds, which will take our team until the end of the year to finish the job.

Clark|Weitz|Clarkson (CWC), a joint venture, is the project’s design-builder. The new terminal is scheduled to open in early 2023. 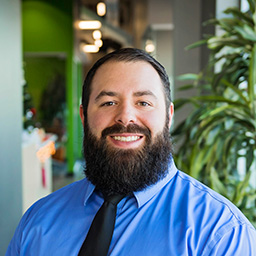