The city of West Des Moines, Iowa, has grown leaps and bounds in the last two decades. But even as residential areas, retail space, commercial buildings, and major infrastructure sprang up seemingly overnight, 13 acres of prime land perched just south of a major juncture on Interstate 80 sat untouched. Until 2016.

That’s when owners R&R Realty approached us about creating Westfield, a groundbreaking new office complex with “urban amenities” that would attract new industries and top talent to the area. What they had in mind—a 180,000-square-foot Class A office building with two four-story office wings, a central atrium, underground parking, a rooftop patio, food truck parking, and more—required a number of comprehensive services.

From conceptual site planning, survey, preliminary and final platting, civil and landscape design, site plan approval, and final construction documents to the execution of grading, parking lots and utilities, we were able to quickly take this project from dream to reality. The city of West Des Moines provided site plan approval in March 2017, and construction began soon afterward. Crews are working on the final phase of the project now and are on track to allow tenants to move in in the fall of 2018.

The project may have been two decades in the making, but with the economic growth the state-of-the-art Westfield building is poised to bring to West Des Moines, the timing was just right. 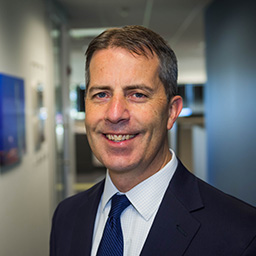