In the mid-2000s, the City of Lenexa, Kansas, developed a watershed management master plan for flood control, the centerpiece of the plan being the Clear Creek Regional Stormwater Facility, which was to encompass 130 acres of undeveloped land.

The project was just building up steam when the 2009 recession hit, forcing the city to halt until 2014. But instead of implementing the original flood control lake, the city wanted to explore more innovative and bud­get-conscious ideas. Enter Olsson. Our team, led by Brent Johnson, developed and pitched three multi-use concepts for the 130-acre tract; the city, led by Tom Jacobs, selected a concept that coupled wetlands with resident-friendly features like nature trails and a 40-acre recreation area; and the collaborative work began.

A number of houses downstream had been impacted by stream erosion and flooding, and we were very conscious of this as we developed the upstream watershed. We worked with the city’s stormwater engineers to create two regional, water-absorbing wetlands and incorporate the existing stormwater best management practices (BMPs) in place. Also, whereas most cities require all subdivisions to provide their own flood control measures, Lenexa’s flood control facility is regional, allowing subdivisions to use it for a fee.

When the recession hit, some subdivision developers failed to fully realize their plans for stormwater management, resulting in lower water quality for residents. We incorporated green infrastructure and allowed developments to opt into the city’s solution, optimizing water quality for all citizens of Lenexa. How refreshing.

It’s not a project if something doesn’t need to be relocated. In this case, that something was 1,300 feet of an 18-inch sanitary sewer line, which we had to relocate as we navigated around a 42-inch water main owned by a neighboring city. Lots of collaboration with city officials made it possible.

With so many acres to spare, the city sought to provide residents in nearby developments and Lenexa citizens at large more green space and recreational opportunities. We proposed connecting adjacent developments with a mile of trails and adding more recreational amenities as well.The Clear Creek project is still going strong, with housing and park development coming soon. The wetlands provide water treatment; the detention basin provides flood control; and both provide residents peace of mind–not to mention access to walking trails, and some pretty cool wildlife, in their own backyards. 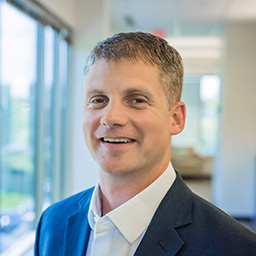