Restoring the foundation of a national treasure

Situated on the banks of the Mississippi River in St. Louis, Missouri, the Gateway Arch is an engineering marvel that rises high into the sky and leaves visitors in awe because of its simple beauty. 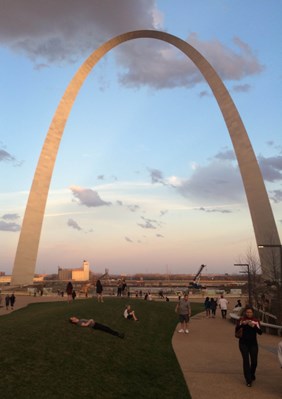 Visitors to the Gateway Arch National Park relax on the "Park over the Highway," which provides easy access to the Arch from downtown St. Louis, Missouri.

Keeping vegetation alive required constant applications of fertilizers and irrigation, which didn’t always work. The park’s caretakers frequently had to replace plants that simply could not survive in the poor soil conditions or withstand the heavy volume of foot traffic from up to 3 million visitors per year.

In 2010, Michael Van Valkenburgh Associates (MVVA) won The City + The Arch + The River international design competition to connect the downtown area with the Gateway Arch National Park. The project would also provide relief from the stranglehold the interstate highway system had on the riverfront and bring more sustainable management practices to the park grounds.

“We didn’t touch the arch,” Eric Moraczewski, executive director of the Gateway Arch Park Foundation told USA Today. “What we did is improve the environment around it.” 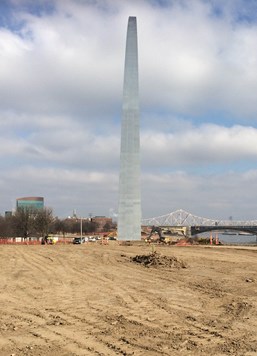 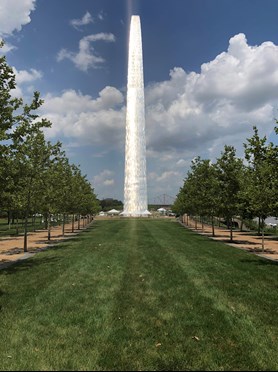 Before and after. Soil scientists replaced the existing soil (left) at the Gateway Arch National Park grounds, and the new soil withstood thousands of visitors for the grand opening (right).

Taking Advantage of a Successful Partnership

MVVA brought Olsson into the project to define and characterize the existing soils and develop and design new soils that could be horticulturally productive on the park grounds. Olsson was tasked with creating a new soil profile that would be sustainable for the landscape, which covers 91 acres of land.

“We like to work with partners who we’ve had success with before, and we had a good working relationship with the staff at Olsson,” said James Smith, senior associate at MVVA. “When it comes to soil, we try to factor in the site location and then look for a soil scientist who is familiar with the area. And with Olsson’s office based in Kansas City, it’s a good fit, especially when you consider the location and Olsson’s expertise with planting soils in the region.”

During the original construction of the Arch site, builders trucked in soil from another area that was under construction—the St. Louis Lambert International Airport. The soil brought to the Arch grounds consisted dominantly of silt and clay, and it formed a thin layer of top soil.

Not all the soil had to be replaced. MVVA discovered many trees in the park were vibrant and healthy. The goal was to keep as many trees as possible to reduce cost, so Ted Hartsig, a senior scientist who led Olsson’s team on the project, needed to manage the existing soils and make sure any new soil added could be blended or feathered in to the existing areas.

Another challenge Ted and his team faced was dealing with different soil characteristics throughout the park. For instance, the soil for the flat areas had to be sturdy enough to withstand major foot traffic from visitors, while the steep slope toward the Mississippi River had to be compacted enough to hold its ground.

After searching far and wide for the precise soil, a supplier was found right across the Mississippi River from St. Louis. The supplier produced enough soil to cover more than 18 football fields 3 feet deep.

“If the soils weren’t similar, the vegetation in different areas will not grow and develop the same and the landscape would be inconsistent,” Ted explained. “By matching the new soils to the existing soils, the vegetation responds better. Also, by conditioning the soil and restoring a balanced soil system, vegetation establishes quicker, and the roots grow deeper and stronger.”

Much of the groundcover vegetation on the park grounds is fescue turf grass. Prior to the renovation, the grass had shallow roots because of the hard, silty soil, was in variant states of health—from poor to OK—and was mixed in with weeds and invasive species. Every year, the park’s maintenance staff replaced about 20 percent of the turf grass, and a significant number of trees. Combine these replacement costs with the cost of fertilizers and irrigation and it becomes evident that the Gateway Arch Park’s landscaping was a massive expense for the Park Service.

“We had to create a more sustainable system,” Ted said. “Our goal was to create a soil profile where the roots would go down 10 or more inches. We found that the grass roots were extending that deep and more within just a few months. Now, the maintenance team can water less and use less fertilizer, and the vegetation still looks healthy.” 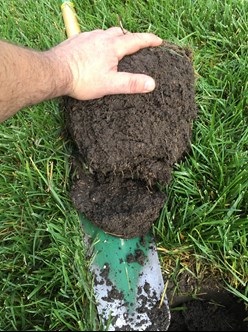 Grasses and plants on the grounds of the Gateway Arch National Park can sink its roots 10 inches into the soil, which was conditioned by Olsson soil scientist Ted Hartsig and his team.

To condition the soil, compost was blended in at varying rates, depending on land use, to serve as the food source for rebuilding the soil microbiology. In areas where soil could not be disturbed, more than 400,000 tillage radishes were planted. Tillage radishes have deep, thick roots, which loosen soil. The radishes were left to decompose, which added nourishment.

In addition, Ted and his team worked closely with James Sottilo, president of Ecological Landscape Management, which provided liquid biological amendments to the soil. These biological amendments contained various microorganisms, fungi, and bacteria and would allow the roots to receive greater benefits from nutrients in the soil.

“Working with Ted and his team at Olsson and Ecological Landscape Management is like a one-two set of punches we like to have in our arsenal for soils,” said James Smith of MVVA.

The soil Ted’s team designed for the “lid” had to be sturdy enough to handle the heavy pedestrian traffic expected for the Park Over the Highway.

“We didn’t have to manufacture a separate lightweight soil for the Park Over the Highway,” James said. “We prefer to use our regular planting soil, and we were able to because the bridge engineers designed the new bridge for the load we specified so we could get our full plant bed soil profile in the planter areas on the park. We also used a geofoam under the planting soil profile to get some topography in there.”

The Gateway Arch National Park also needed transformation at its northern end. Designers turned this area into an inviting space that includes an outdoor event area for concerts and gatherings and walking paths for pedestrians. What used to be home to a multistory parking garage is now filled with native plants that thrive in the new soil system. 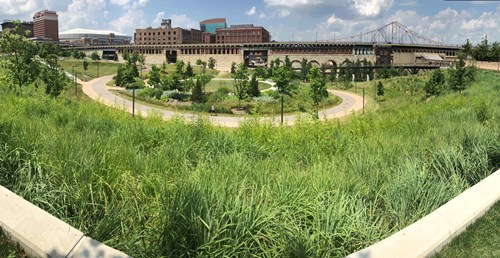 In addition to designing soils for the park, Ted and his team also designed the soil for the renovation of Kiener Plaza, which is just west of the Old Courthouse near the park.

The renovation of the park has been an instant success.

“The soils go in during the construction, in conjunction with the liquid biological amendments, along with the plantings,” James said. “The plants have shown good vigor, and we’ve had good results in the lawns, trees, and shrubs, which indicate high performing soil.”