No, they did not put a transmission tower in the middle of the Platte River.

One might assume otherwise upon seeing a photo taken after March 15, 2019, north of Ashland, Nebraska. The H-frame transmission tower rises almost from the center of the wide, shallow channel of the state’s most iconic river.

Had the same photo been snapped a few days earlier, it would have shown the tower firmly planted on dry ground 300 feet west of the Platte. The before-and-after images dramatically reveal the power of a historic flood and the impact it had on the Omaha Public Power District (OPPD), the owner of the transmission structure.

A combination of heavy rain and rapid snowmelt last year unleashed unprecedented flooding across eastern Nebraska. The powerful floodwaters near the confluence with the Elkhorn River eroded several hundred feet of the Platte’s west bank.

As high water receded, the new channel remained, leaving the transmission tower in a precarious spot. The flood impacted three structures in total, which supported two different high-voltage transmission routes. Given the major expense and time required to rebuild transmission lines, officials with the utility opted to reinforce the structure foundations.

And they selected Olsson to help make sure the project was completed before the next major flood hit. 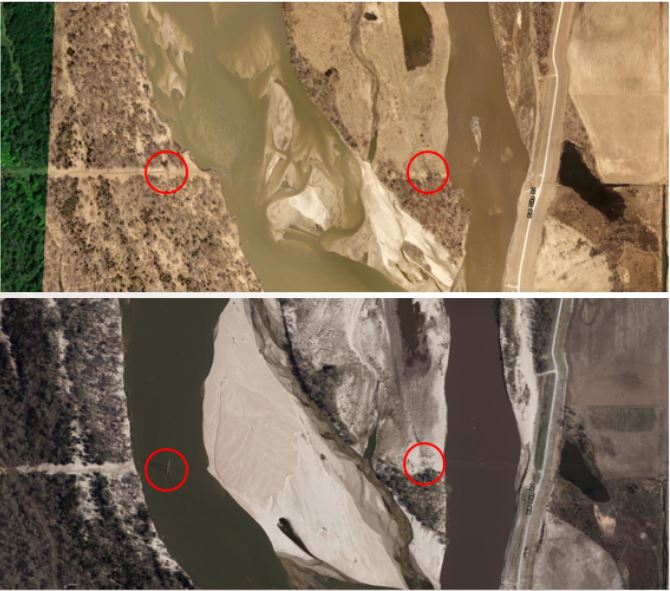 The top image shows the Platte River and transmission towers (red circles) before flooding in 2019 and the bottom shows how the river channel migrated and submerged the base of the west tower.

OPPD officials knew potential ice jams, snow melt, and rainfall could again threaten the region in the late winter of 2020, but they also needed to keep the power lines energized to serve their customers during the high-demand summer season of 2019. That gave Olsson and the selected contractor roughly 16 weeks through the heart of winter to complete the project.

Brian Jueneman, construction administration manager at Olsson, said the airboat trip to the site revealed that river current had scoured several feet of sediment away from the tower’s concrete drilled-shaft foundations. It also drove home the fact that there would be no time for negotiations and change orders once the project started. The contract documents, plans, and specifications had to be complete and thorough to eliminate “what-if” scenarios. A key piece of this was a mandatory pre-bid meeting for the contractors.

“The goal of OPPD was to protect these structures from catastrophic failure,” Brian said. “What looked like a simple project at the outset quickly became a challenge of how we produce a set of plans and how do we get a good bidding environment.”

One major challenge was how to complete the job in the middle of a river with severely limited access. Simply reaching the sites by land wouldn’t be easy, as the flood had piled sand over access routes. Potential issues related to environmental permitting and nearby wetlands would also need to be addressed, along with designing a structural fix to provide long-term stabilization to the transmission towers. 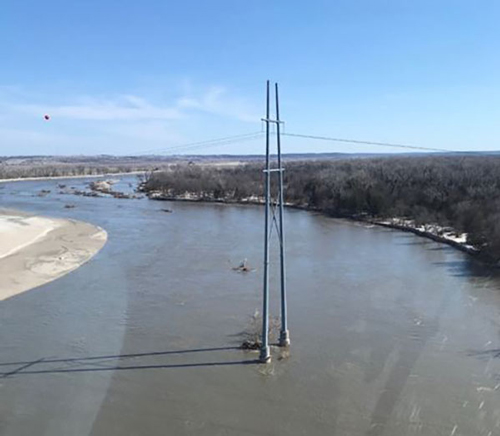 Though it was built on solid ground, the OPPD transmission tower now stands in a river channel.

We covered the waterfront when it came to providing services to our project partners.

Carter Hubbard, engineering technical leader with our Water Resources team, provided hydraulic analysis to better predict how the river current would impact the structure over time. Amy Cherko, project scientist with our Environmental team, assessed the regulatory parameters and came up with a strategy to obtain permits.

Tyler Cramer, project engineer on the Road and Bridge team, said a structural analysis showed that movement of the wires and structures caused by wind would generate significant lateral loads on the bases. He not only had to account for the impact of the river current on the bases, the solution had to be able to withstand ice jams and potential major flooding.

His design called for sheet piling surrounding the bases to be driven 35- to 40-feet into the riverbed. The space between the piling and the tower bases would be backfilled with granular material and topped with grouted riprap.

Limited site access required Olsson to design a road more than two miles long to reach the east side of the river and another that was a half-mile long on the west side. The re-constructed roads allowed Hawkins Construction to move equipment and material and install a temporary bridge so crews could work on the submerged transmission structure. The bridge satisfied a federal requirement that prohibited fill from being pushed into the Platte River.

A completed base structure designed by Olsson on one of the towers that wasn't left submerged by flooding.

While everyone hopes Nebraska will never again see another record-setting natural disaster, the OPPD structures in and along the Platte River are in a much stronger position to withstand the next flood.

“Hopefully OPPD never has to come back to these structures again,” Tyler Cramer said.