Scrutinizing the interior of a steel storage tank isn’t as simple as it sounds when the structure reaches 70-feet from ground to ceiling.

Click and drag this 360-degree image to see how the technology enables inspections in difficult environments.

Lincoln Electric System (LES) encountered such a challenge when it needed to inspect a thermal energy storage tank at the Rokeby Generation Station in Lancaster County, Nebraska. The tank, used to maximize power production during peak demand, needed to be inspected for wear and possible repair.

LES considered having a crew assemble scaffolding inside the tank, said Chris Hodges, power supply engineer for the utility. Doing so would have cost tens of thousands of dollars, come with safety risks, and taken more time than he wanted to budget for the inspection.

Instead, he wondered if a camera-equipped drone could be used for the task. So, he reached out to Jonathan Nunes, engineering technical leader on Olsson’s Mechanical Electrical team. In turn, Jonathan brought in Ryan Meints, a design associate and one of our certified drone pilots.

During a test flight Ryan discovered a drone wouldn’t work inside the tank. All that metal wreaked havoc with the radio frequency signal that allows the remote control to communicate with the drone.

Fortunately, our pilot had another idea.

A technology expert, Ryan was confident a 360-degree camera could generate a comprehensive set of digital images that LES could use for the inspection.

The spherical camera – slightly smaller than a volleyball – features six lenses that each have a 120-degree field of view. Software stitches together multiple frames into a high-definition image that can be shifted, tilted, zoomed, and otherwise manipulated (think Google Street View). The effect practically immerses the viewer in the photograph.

Ryan just needed to come up with a way to position the camera. First, he made a trip to a hardware store, where he bought an aluminum rod, braces, nuts, and bolts. But the store didn’t have anything he could use to mount the camera on the rod.

So, Ryan fabricated a mount with a 3D printer. He drew a sketch, programmed the printer, and downed some caffeine.

“It can take a while to print an object,” he said. “So, I didn’t sleep much – I was up every hour making sure the printer was working, because if it didn’t print right, we weren’t going to be able do the project.” 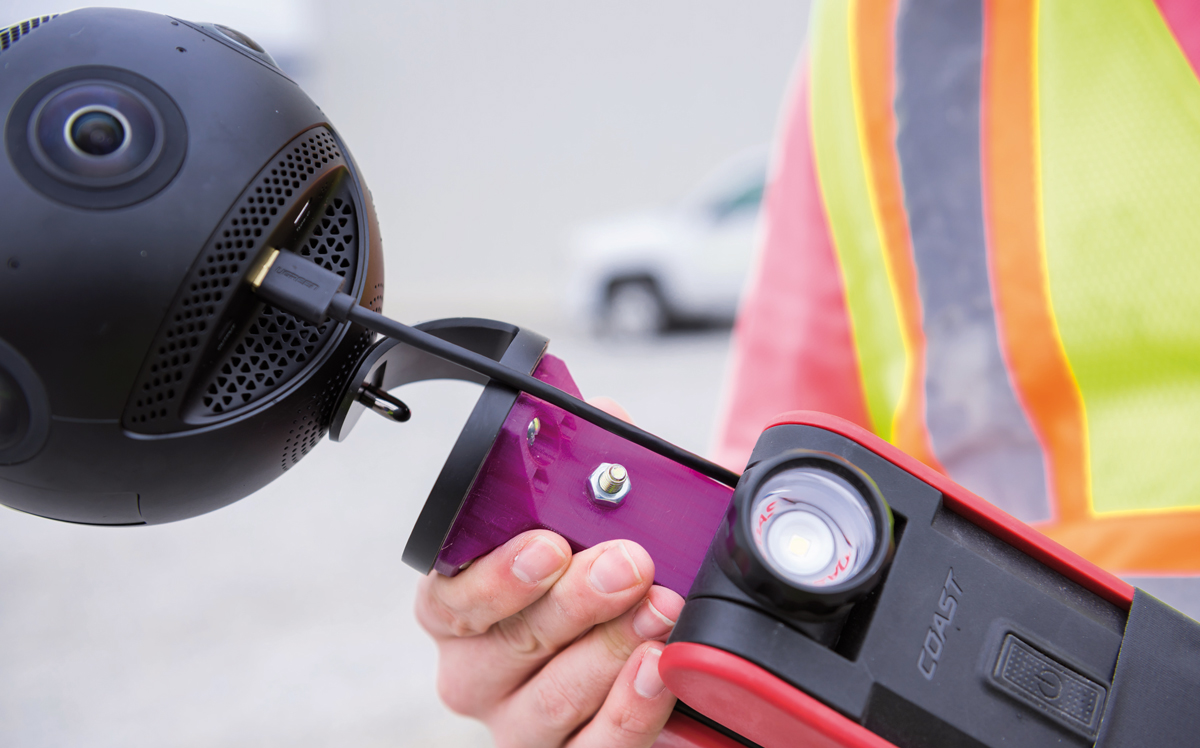 The next morning, Ryan lowered the camera through the top hatch of the storage tank. That night, he downloaded the ultra-high definition 12K files onto his laptop and, after a good night’s sleep, ran the images through the editing software.

Our partners at LES were able to conduct their inspection – from their desks.

“He was able to get very good photos,” Chris Hodges said. “It worked really well.”

Ryan and Jonathan said the same camera technology could be used for all sorts of applications in the field – sewers, pipelines, railways, bridges, towers, construction administration, nondestructive testing, etc.

“We’ve got software people who can code, so there’s plenty of things we can do with this,” Ryan said. “If clients need a custom application, with a roomful of engineers, we can figure something out.”

Figuring out solutions is right up our alley.

Ryan’s already thinking of a remote-control car to carry the 360-degree camera into hard-to-reach places.

If he can’t find what he’s looking for, he can always fire up the 3D printer.