The new Medical Center Plaza defines the south entrance to the state’s only public academic health science center, as well as to a hospital that Newsweek ranks 56th on its list of the World’s Best Hospitals. What’s more, the plaza displays a major installation by a world-class sculptor, pays tribute to one of the university’s longtime researchers, and invites patients, faculty, health care providers, and residents of the bustling Omaha neighborhood to take time out and reflect.

“For the first time, visitors who travel up 42nd Street to our campus will have a first impression that matches the extraordinary patient care, research, and education that takes place within our campus,” UNMC Chancellor Jeffrey P. Gold, M.D., said at the dedication ceremony in late September. 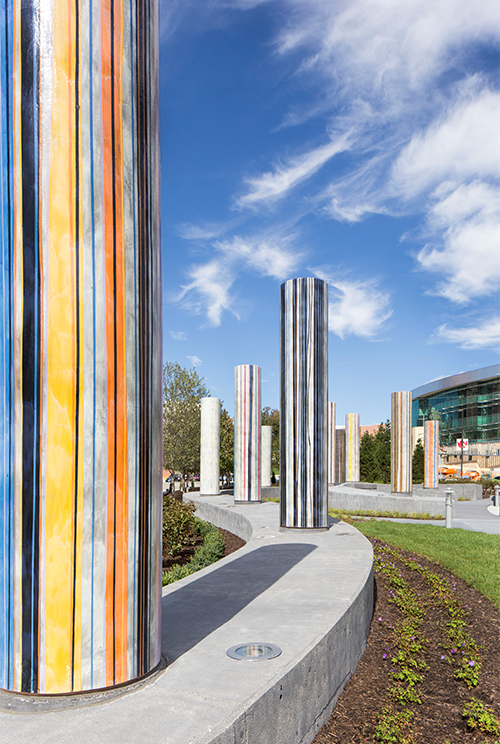 The complexities included the relocation of an autobody and repair business that stood on the northwest corner of the intersection of 42nd and Leavenworth Streets. Among other things, we assisted with moving the shop’s classic neon sign to the opposite corner, which allowed the neighborhood to keep an iconic landmark.

Our team coordinated with the City of Omaha on relocation of a bus stop and storm sewer, and we worked with Omaha Public Power District on moving several power poles. We conducted weekly meetings with stakeholders and adjusted on the fly to meet all needs and contingencies. The bottom line: Deadline met!

The plaza is marked by lighted, curved walkways, mature trees, and landscape plantings. What distinguishes the space, however, is a collection of 18 columnar sculptures by Omaha artist Jun Kaneko titled Origin. Each of the hand-painted slip and glaze ceramic sculptures weighs 3,000 pounds and reaches 13 feet in height.

The sculptures are displayed on two concrete walls known as plinths. One plinth is serpentine and rises from 12 inches at the south end to approximately 5 feet at the north end. The second plinth is circular, and its top matches a plane that will complement the Edwin G. & Dorothy Balbach Davis Global Center, currently under construction across 42nd Street to the east.

The plaza also features a plaque dedicated to Larisa Poluektova, M.D., Ph.D., a professor for more than two decades in UNMC’s Department of Pharmacology and Experimental Neuroscience. Her work as co-director of the Translational Mouse Model Core Facility has supported greater understanding of human immunity and vaccines, according to a UNMC news release. Polina and Robert Schlott, the professor’s daughter and son-in-law, are the lead donors to the plaza project.

Finally, we coordinated with the medical center on the installation of two monument signs on the northeast corner of the intersection in front of the future Davis Global Center. Because the planned location for the monument signs was a low spot of the site, we managed significant redesign of the drainage, grading, and landscaping to support the installation. 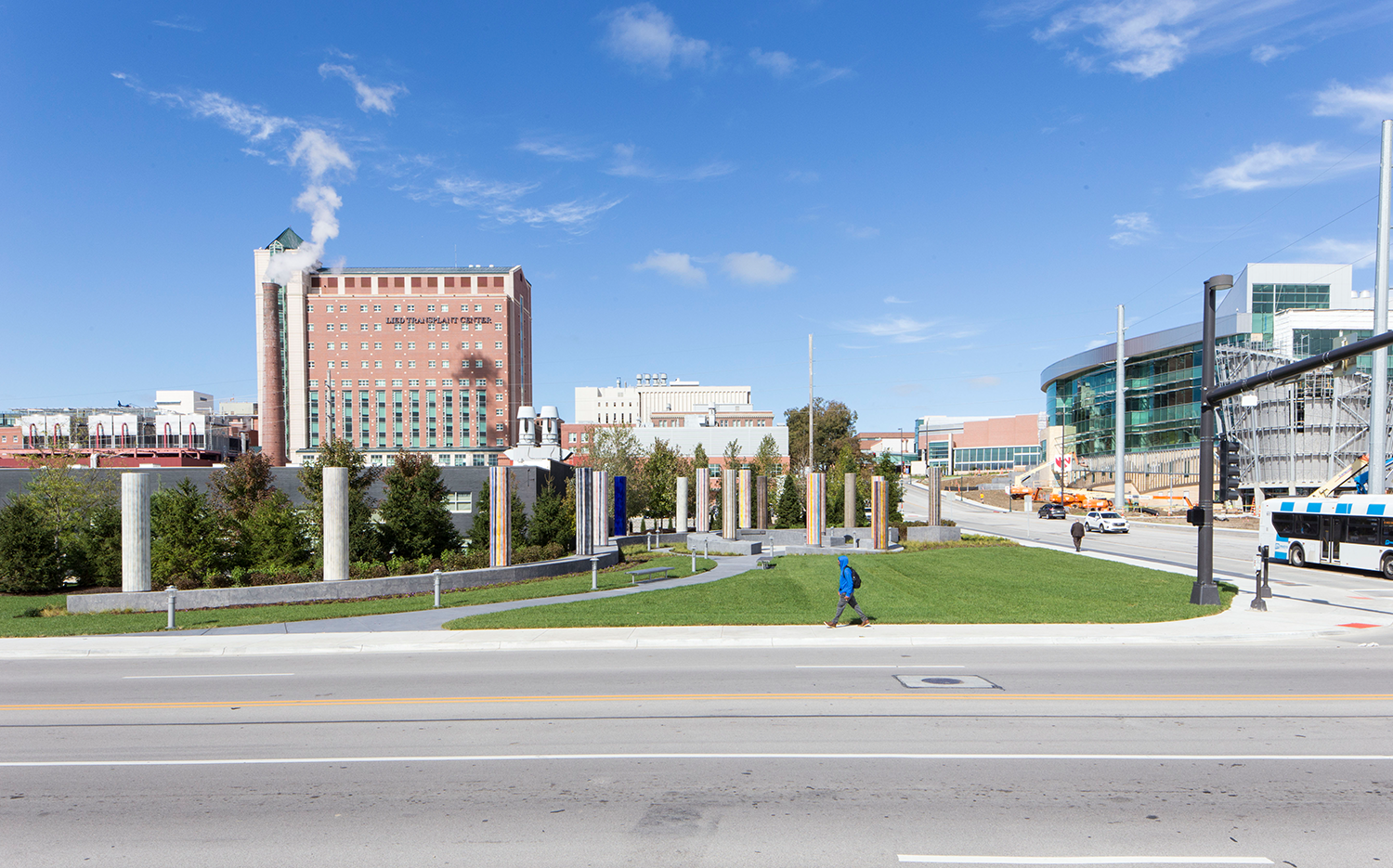 The project continues our involvement in reshaping the south end of the campus. Other projects we’ve partnered in include the Truhlsen Eye Institute and Lauritzen Outpatient Center to the east of the new plaza.

The monument signs and the plaza provide UNMC and the Nebraska Medical Center something it has long needed – a clear indicator to visitors that they have entered the medical center campus.