Coal mining once played a vital role in the Kansas economy. For nearly 100 years, miners excavated coal from the ground in the southeastern part of the state. Production hit its peak in the 1920s and fueled the state’s growth.

Strip-mining practices damaged the land. Left in the wake of fleeing mining operations were deep, high-walled pits – some up to 50-feet deep. These pits, located just a few feet from nearby roads, eventually filled with groundwater and posed a serious hazard for drivers.

“Prior to the passage of the Kansas Law in 1969 and the Federal Surface Mining Control and Reclamation Act of 1977, coal was excavated from the ground and none of the topsoil was salvaged,” said Marlene Spence, administrator of the Surface Mining Unit (SMU) for the Kansas Department of Health and Environment (KDHE). “They stopped at the road because that was as far as their lease allowed them to mine. Because these deep pits were close to roads, if people drove off the road near a pit they could be seriously injured or even drown.” 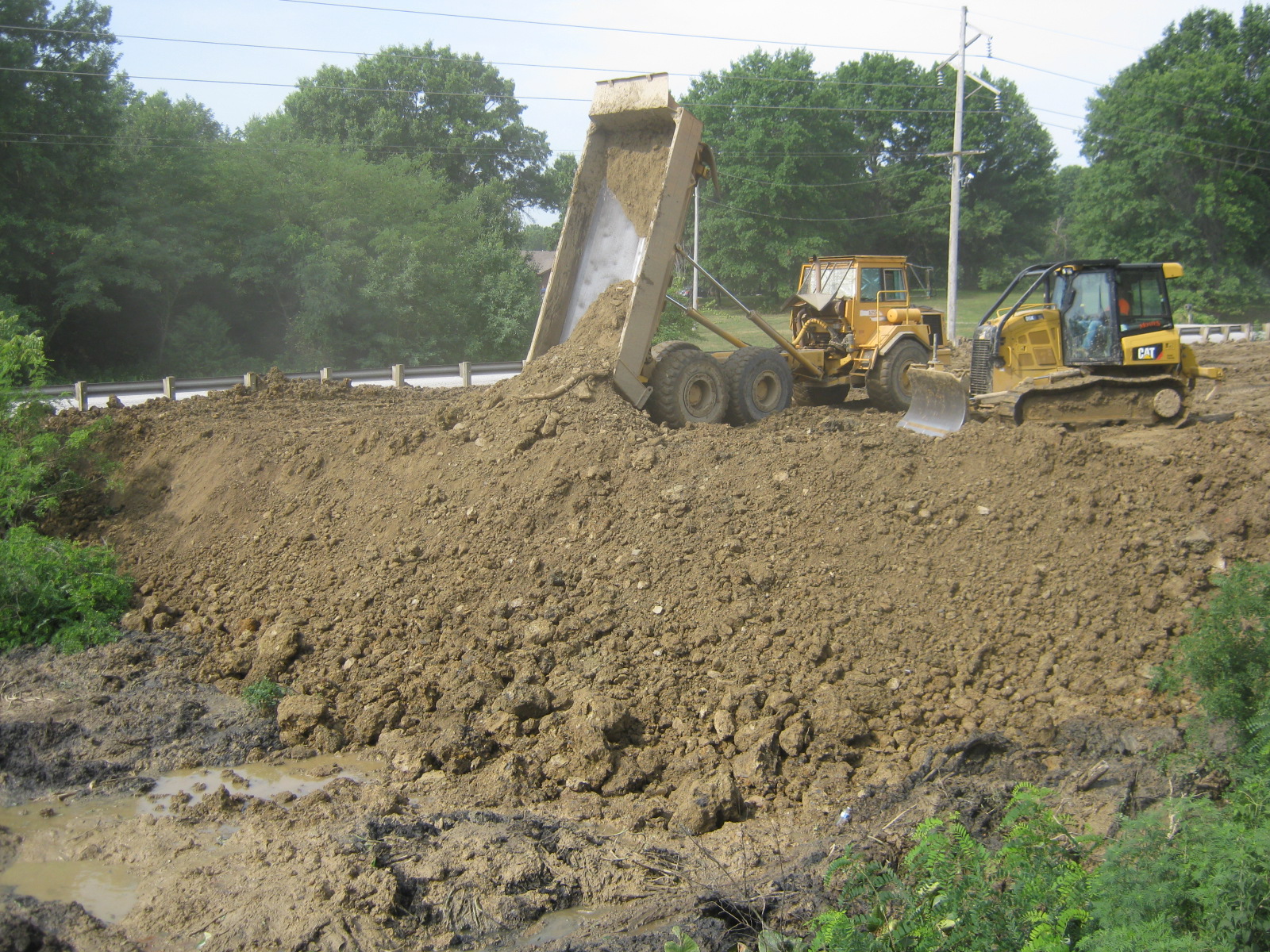 Due to budget constraints in the early years of the Abandoned Mine Lands program, the State of Kansas attempted to solve the problem by placing guardrails between the road and the pits. Guardrails at first were a good solution but they were often struck by cars and damaged.  A more permanent, safer, solution was needed.

Olsson had an on-call engineering contract with KDHE when the department reached out to see if the firm would be interested in designing remediation and reclamation projects as part of the on-call agreement. The answer from Shaun McConnaughey, a project engineer based in Joplin, Missouri, was a quick yes, and, after a competitive bidding process, Olsson’s proposal was selected.

Shaun and other members of our Joplin General Civil team worked on a few of the pit remediation/reclamation projects before the Surface Mining Unit sought bids for a more challenging task – to design a solution for three pits, two of which was on land owned and managed by the Kansas Department of Wildlife, Parks and Tourism (KDWPT) and one where the pit was adjacent to a body of water on private property. Olsson once again was awarded the projects.

“We’ve done several of these projects, and the scope is always the same and the project is never the same,” Shaun said. “In this case, they were looking for a solution that would meet two objectives – make the areas near the road safer and provide suitable fish habitat while maintaining the same water surface area. We jumped at the chance to come up with a workable solution and deliver what the department wanted.”

The Kansas Surface Mining Unit maintains an inventory of eligible sites that were mined for coal before August 3, 1977, when the Surface Mining Control and Reclamation Act Public Law 95-87 passed. Abandoned Mined Land Inventory System sites are ranked according to hazards and reclamation is completed based on priority. Kansas receives about $3 million in federal funds each year to reclaim abandoned mined sites.

Before starting the design work, our team met with KDHE, SMU, and KDWPT to determine each groups goals, of which there were two. The first was to design a solution that didn’t reduce the surface water area of the pits while maintaining and protecting wetlands on the site as much as possible. The second, but primary objective for the SMU, was remove the hazard along the roadway to protect motorists.

Next, our Kansas City Environmental team, led by associate scientist Kyleen Kelly, needed to determine if the areas affected by the new design would infringe upon the habitat of the gray and northern long eared bat and the broadhead skink or any other listed species. The cave-dwelling gray bat is native to the area but protected by the Kansas Nongame and Endangered Species Conservation Act (KNESCA) and the Federal Endangered Species Act. The broadhead skink is state-listed species protected by the KNESCA.

The team prepared the necessary environmental permits for stormwater, floodplain, and other water-related issues; secured permits from the U.S. Army Corps of Engineers; and obtained clearance from the U.S. Fish and Wildlife Service, the Kansas Geological Survey, and the State Historic Preservation Office. They also completed a wetland delineation study within the project’s grading limits to determine how the project would affect the existing wetlands. 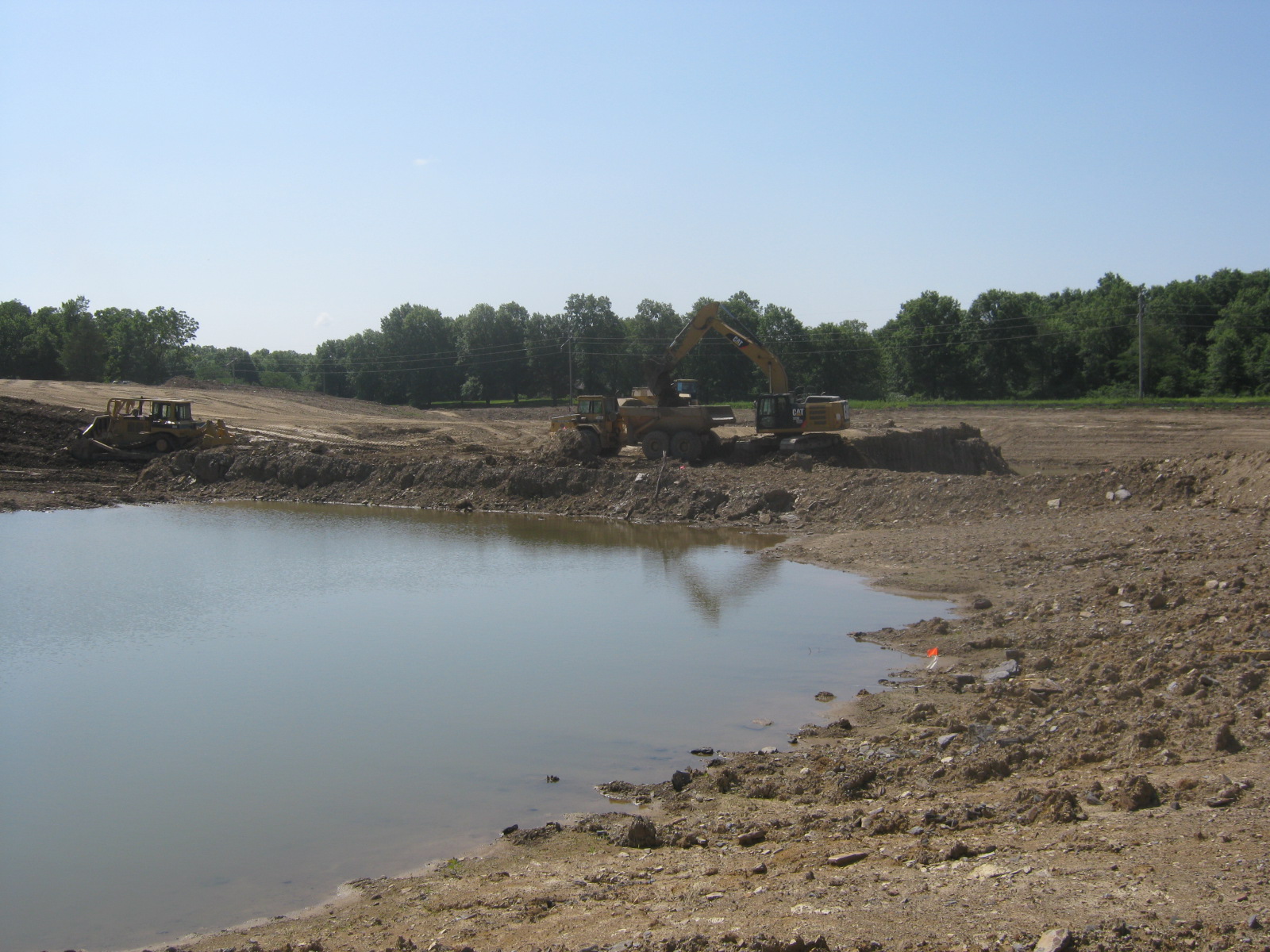 One pit, L-shaped and the largest on the site, was surrounded by wetlands. The design shifted the hazard 60 feet farther away from the road, increased the water surface area of the pit, and provided a new wetlands area adjacent to a shallow spawning ground for fish. The grading for this pit included cuts, fills, cross-sections, and special features such as spillways and hydrology channels.

“We designed a new pit that met the minimum surface requirement, had the same depth, and ended up about 25 percent larger,” Shaun said.

We worked with KDWPT to maintain the depth of the largest pit to provide suitable water for fish to over-winter along with some shallower areas for spawning.

“Shaun had to overcome some engineering challenges and Kyleen had to work with various environmental challenges to get National Environmental Policy Act clearance,” Marlene said. “Working with Olsson’s civil engineering and environmental teams has been very good. Shaun and Kyleen are both the consummate professionals you’d expect them to be. They respond quickly and are attentive to any and all suggestions.”