Making a Grand Statement in Texas

When you work in the state of Texas, you either go big or go home.

Engineers and landscape architects at Olsson went big – on a very grand scale.

Olsson is involved with the development of Grandscape, a massive, one-of-a-kind, mixed-use development project located in the Dallas suburb of The Colony, Texas. To call Grandscape a shopping center would be a gross misrepresentation of reality.

“This is really a destination,” said Wyatt Popp, a civil engineering leader at Olsson and the firm’s project manager for Grandscape. “This is more than a place to shop and be entertained. This is a destination that will draw in people from a huge radius.” 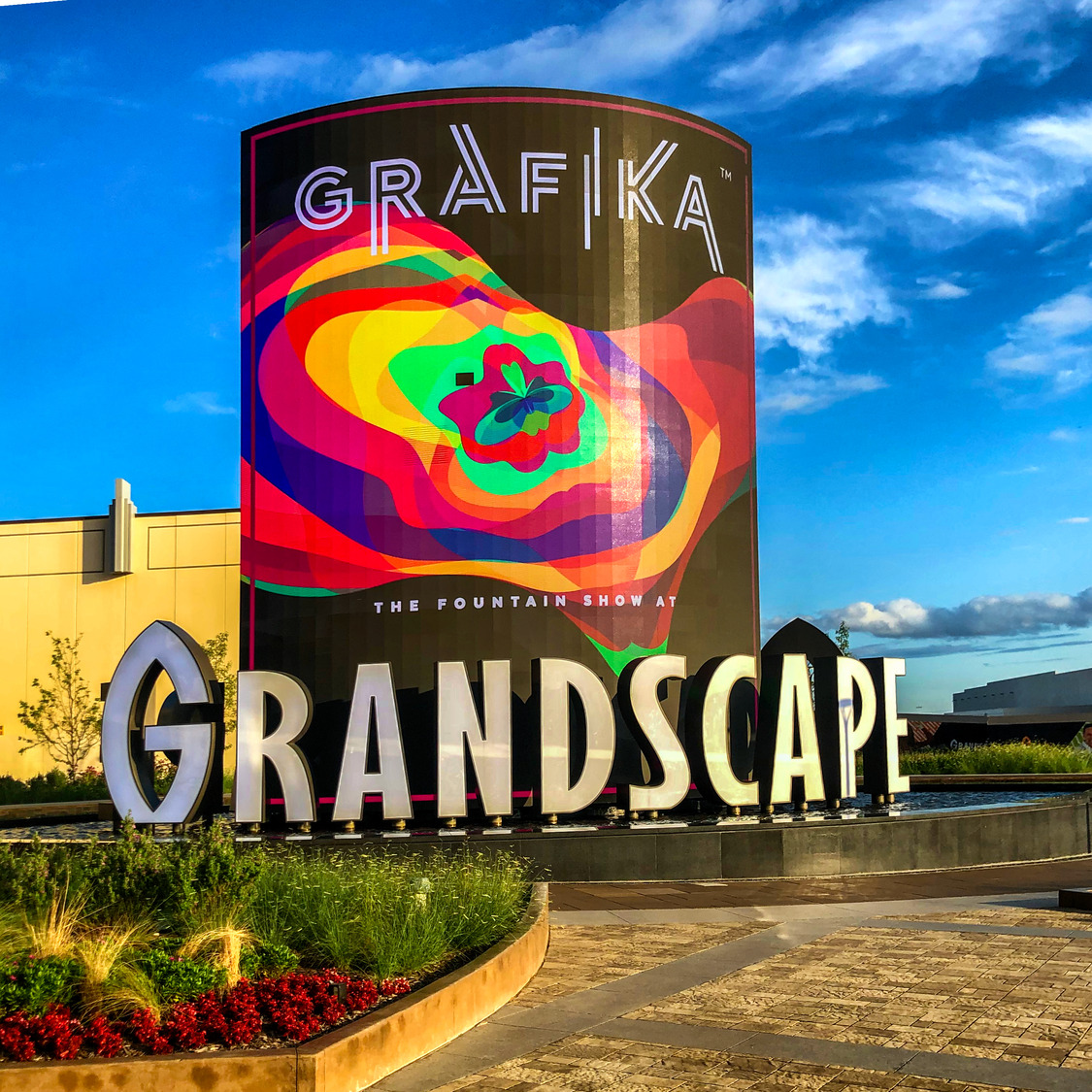 Grandscape is a destination that includes retail stores, entertainment, and beautiful landscapes.

In other words, Grandscape isn’t just a clever name based on wishful thinking. We started working on the project in 2016 and, as of the fall 2020, only about 30 percent of the project is completed and open to the public.

Anchoring Grandscape are two mega retail stores: Nebraska Furniture Mart (with nearly 1.9 million square feet of space and the main developer) and a Scheel’s store that covers more than 331,000 square feet. In between is something for everyone.

At the core of Grandscape is a 90-acre lifestyle and entertainment center that includes multiple levels of shops, public and private entertainment spaces, and many one-of-a-kind restaurants. This area also includes The Grotto, a subterrain pedestrian area that contains eateries, shops, gardens, and walkways. The main interior courtyard opens to a large green space.

Our focus is the lifestyle center. We helped modify the master plan (along with HTH Architects out of Los Angeles) to make it more functional for shoppers. We provided the civil engineering work and the landscape architecture design for the center.

“We helped provide the vision for the outdoor components of the center,” Wyatt said. “We helped design a space where people gather and connect with one another.”

Everywhere you look around Grandscape you’ll see the handiwork of landscape architects from the Olsson Studio. We developed the placemaking for the parking lots and the project’s perimeter, the Grotto, the lifestyle center, and Scheel’s. 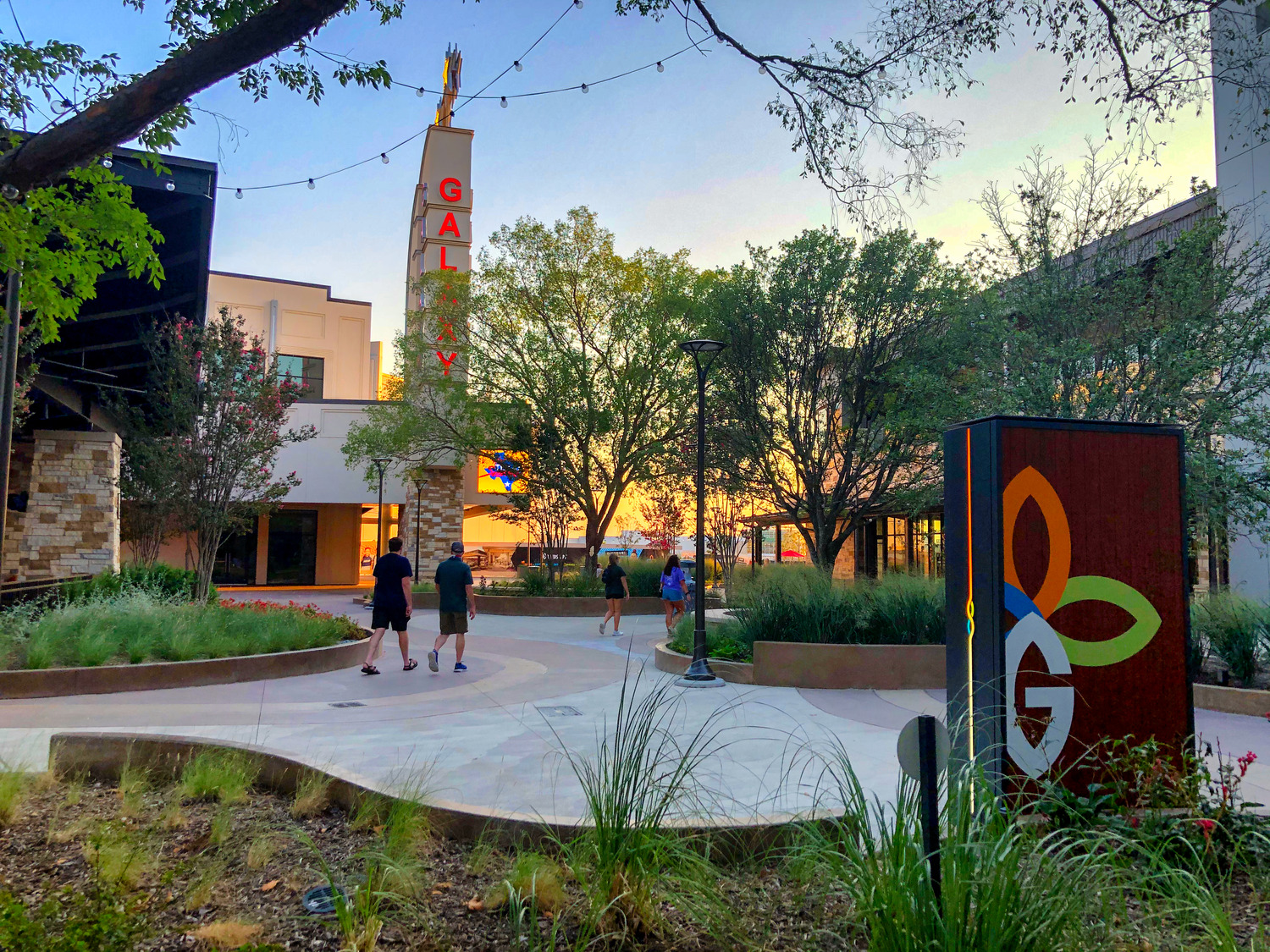 One of the unique aspects of Grandscape is the mature trees planted throughout the development. Korey Schulz of the Olsson Studio explained that the goal was to incorporate large trees to deliver an instant canopy to areas of Grandscape.

We found an unlikely provider of large trees – the worldwide headquarters of retail giant J.C. Penney, which is located about two miles from Grandscape.

“They were redeveloping the J.C. Penney site and selling off large trees, so we worked with a tree broker and bought trees at a fair, reasonable cost,” Korey said. “We started tagging trees at the site, and we initially purchased about 20 trees and later added another 12.”

We had the trees transported to the site, where a makeshift nursery was built to house the trees until they were moved to a permanent location.

“When we tagged the trees, we identified spots for each one and started to place them on the design,” Korey said. “A contractor started placing trees when the timing was right. Typically, planting trees is one of the last things you do in a development project. In this project, we planted some before the buildings were constructed.”

Building around large, mature trees is one feature that makes Grandscape unique. 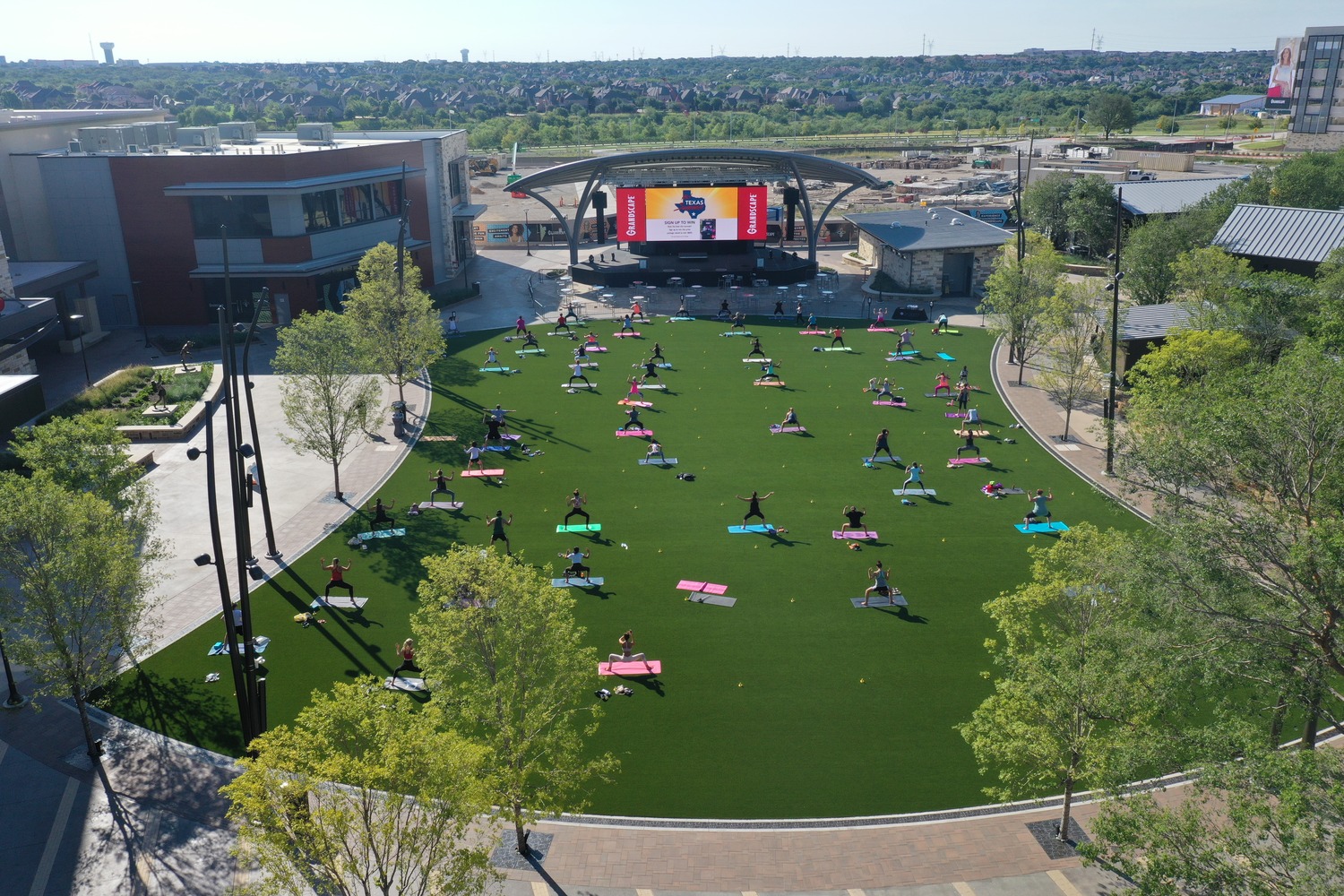 Grandscape includes a large greenspace for people in the community to use and enjoy.

“In working with Olsson, the idea to save those trees and move them to our project became a reality,” said Katie Wedekind, spokesperson for Grandscape. “Our vision from the beginning has always been to have a place that provides shade and beauty and is an oasis within a city. We wanted it to appear as though we found a beautiful park and decided to build buildings around it and these trees were crucial to getting that right.”

Work on Grandscape is ongoing, but nearly 40 businesses have already opened. Grandscape was supposed to hold a grand opening in April 2020, but the global pandemic forced the development to press pause. However, 13 more businesses are under construction and slated to open by early 2021, including the development’s 344-unit residential tower.

It’s expected to take another five years to finish Grandscape. However, the community is already embracing this grand new space.

“From the beginning, we wanted to create a space that was world-class, a place where people from all over the DFW [Dallas/Fort Worth] metro area would want to come explore, experience, and enjoy,” Katie said. “By bringing in many first-to-market businesses, utilizing technology in unique experiential ways, and creating a physical space that is lush, inviting, beautiful, and relaxing, we feel as though we have begun to achieve this goal. We believe this will be the premier development in the DFW area, if not the U.S.”