As Grand Island expands further to the west, it’s essential that the city’s infrastructure keep up with growing demand.

City officials took keeping up with growing demand to a new level.

Rather than make changes to a key roadway that could only handle today’s traffic volume, city officials partnered with Olsson to transform Old Potash Highway from a two-lane rural road into a facility that would accommodate traffic volumes expected 20 years down the road.

Fortunately for Grand Island, our Nebraska Traffic and Technology team has the next best thing to a crystal ball – a group of experts who know how to plan for the anticipated needs of a city.

So, how do you project what traffic will be like in 2040? We started by conducting an extensive traffic study to analyze existing conditions and identify opportunities for improvement. We then used that information to project future traffic usage and patterns.

“We recommended increasing capacity and improving safety by widening the highway and removing conflict points along the corridor,” said Shane King, technical leader for Olsson’s Nebraska Traffic and Technology team.

But it took a team of experts to transform Old Potash Highway into a safe, efficient, workable roadway for the residents of Grand Island, who approved a citywide sales tax increase to fund infrastructure projects. The city’s public works staff worked closely with Olsson, contractors, and business owners along Old Potash Highway to give the roadway a fresh look and a renewed purpose.

"We had a lot of stakeholder meetings, starting before the design phase began, and that continued throughout the project,” said Keith Kurz, the city’s assistant director of public works for engineering. “We were in constant contact with local businesses and property owners to go over any concerns they had and to address them in our final design.”

Old Potash Highway starts near the western edge of Grand Island and primarily serves industrial and retail businesses. In recent years, traffic has increased (along with delays) as more businesses opened, parents transported children to and from a nearby school, and the post office relocated to the area from downtown. In addition, Hornaday Manufacturing, one of the city’s largest employers, is located just west of U.S. Highway 281.

Major changes were needed to efficiently keep people – and vehicles – on the go.

To make this happen, the project team agreed to convert Old Potash Highway to a half-mile-long, three-lane section from North Road to Claude Road and a half-mile-long, four-lane, divided section from Claude Road to Webb Road. Olsson proposed constructing single-lane roundabouts at North and Claude roads and a multilane roundabout between U.S. Highway 281 and Webb Road at Wilmar Avenue. 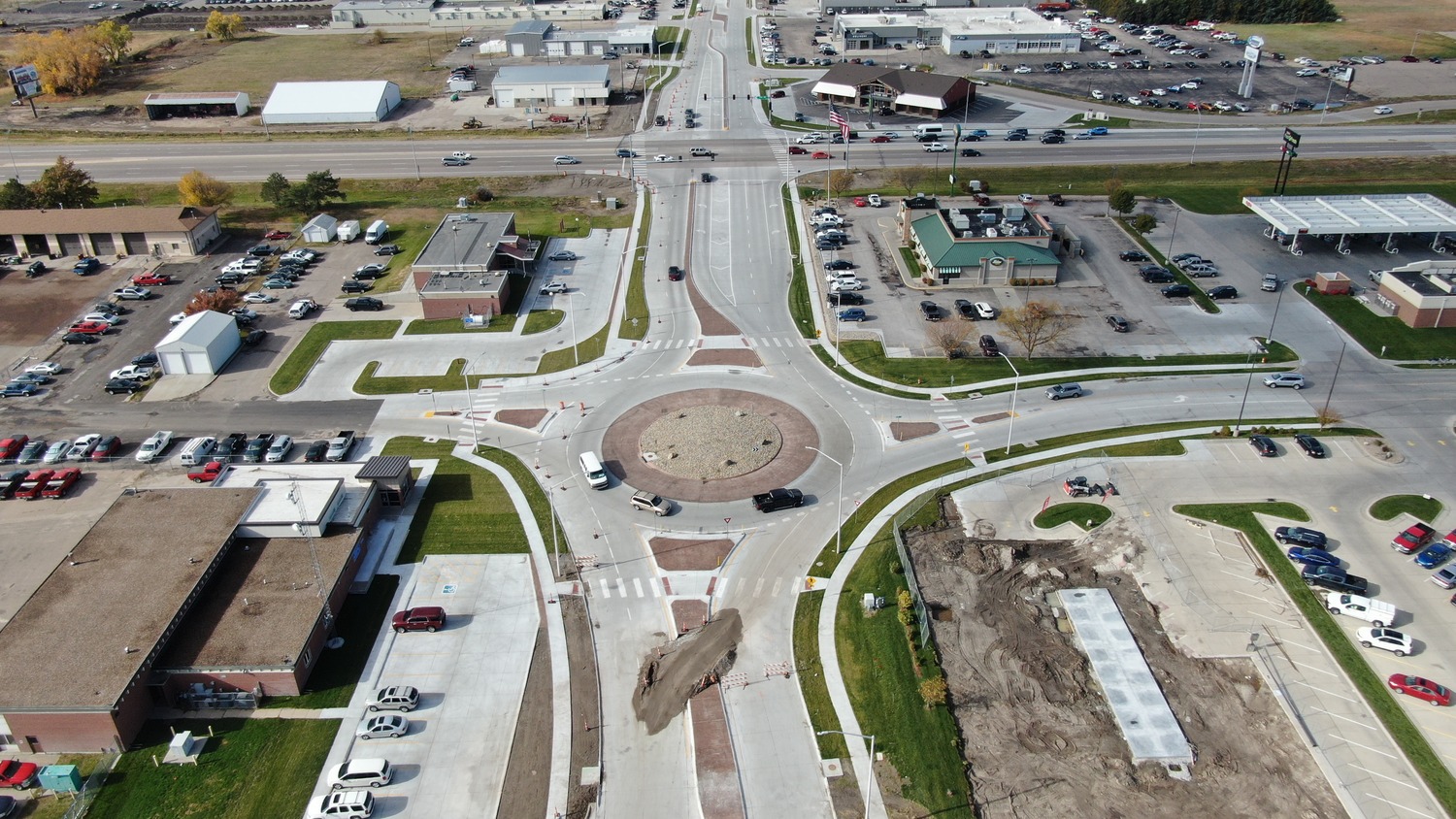 One of the roundabouts that was part of the Old Potash Highway project in Grand Island, Nebraska.

“There was always quite a bit of traffic congestion at the Wilmar intersection and safety concerns where Old Potash Highway intersects with U.S. Highway 281,” said Matt Rief, team leader for the Greater Nebraska General Civil team, who served as the project manager for Olsson. “It’s a pretty high-profile area that drove a lot of the improvements to the corridor.”

Olsson has extensive knowledge of Grand Island and a proven record for designing efficient infrastructure and for partnering with the city.

“There’s a lot of knowledge in their office here,” Keith said. “This was an extensive process, but Olsson made sure we were involved every step of the way. If an issue came up, they would have a quick meeting to figure things out because their office and most project team members are right here in Grand Island. That convenience not only kept the project going but it saved us dollars.”

Olsson’s public involvement team pitched in to help, too. The team worked closely with the city to gather feedback from key stakeholder groups and make recommendations that balanced the city’s needs with public input.

“A lot of our work was proactive and included a pretty big educational component, like putting a video together about how traffic would work. And we created several graphics that included details about the project and when construction would take place,” said Stacey Roach, Olsson’s senior coordinator of public engagement.

“We found that to be very valuable for the public,” Stacey said.

Our public involvement and creative teams created a new brand for the city – Drive GI – to keep residents abreast of progress on numerous roadway projects funded by a half-cent sales tax increase voters passed in 2016.

The project also included a way to reduce flooding along the corridor. Our water resources specialists drew up a new outlet to drain into Moore’s Creek and created a drainage model that included Kaufman Drive. We also recommended additional storm sewer improvements in the area to address concerns about localized flooding.

We coordinated utility relocations, burying overhead electrical lines, and installing a new natural gas transmission line. In addition, fiber optics from six data communications companies, including a major duct bank from CenturyLink, were moved and the relocations recorded to reduce the impact of future roadway work.

The $15 million project was completed in the fall of 2021, a year ahead of schedule, and came in under budget estimates from 2018.