When confronted with the unfamiliar, it pays to think ahead and seek guidance from someone in the know. This applies to many scenarios in land development, but none more than when a project has a potential impact on endangered or threatened species.

Working with and near endangered or threatened species doesn’t have to be as difficult as one might think. The key is to involve wildlife professionals as early as possible. Identifying potential listed species and determining if suitable habitat exists in the project area at the earliest stage of planning leaves open the greatest number of options to protect the species while minimizing project delays.

In other words, resist the urge to bury your head in the sand. 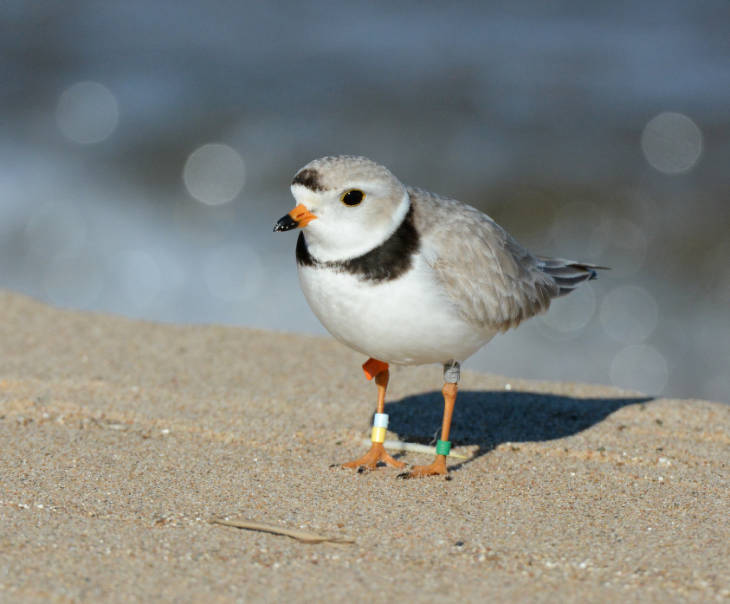 Among the protected species our scientists are permitted to work with are piping plovers (above) and interior least terns (banner photo).

The TPCP works with lakeshore housing communities and sand and gravel mines along the lower Platte River in Nebraska to keep operations and daily activities running smoothly, while also allowing the birds to use open sand areas to raise the next generation. My field work involved carefully capturing terns and plovers for banding and health checks. I also gained vast experience scientifically monitoring nests and eggs, while observing tern and plover behavior at close range.

It is interesting to see adult piping plovers feign a broken wing to draw a potential predator away from their nest or young. And invading the space of interior least terns means getting dive bombed – and pooped on – by adults zealously defending their nests or chicks

Yes, I literally get pooped on at my job. And yes, I wear a hat and try to resist looking up!

My field experience has helped me obtain a U.S. Fish and Wildlife Service (USFWS) Recovery Permit for the two species. Issued to just a handful of professionals in Nebraska, the permit allows me to enter the nesting area, closely monitor the birds, and handle the eggs to determine an estimated hatch date. The estimates can be valuable for contractors when planning their work schedules.

The prudence of early action becomes more apparent in the context of the life cycles of interior least terns and piping plovers. Both nest in sparsely or non-vegetated, sandy shorelines along rivers and nearby reservoirs, lakes, and sand/gravel pits. In Nebraska, both species’ nesting season is between April 15 and August 15. However, the birds can arrive earlier and/or stay later.

To be prepared, I recommend having a plan in place by late March. That way, projects don’t need to rely on a biologist like myself to determine hatch dates, or when the birds will leave the area for construction to occur.

By consulting with an experienced biologist early in the planning process, preventive measures can be taken to keep the birds from nesting in the first place. For example, something as simple as setting up mylar flagging could prevent the birds from nesting in an area within the project area. Obviously, such a strategy cannot be implemented once nests are established.

I have seen first-hand that it is possible to reduce conflicts in a manner that produces positive outcomes for both landowners and wildlife. In the case of interior least terns and piping plovers, lakeshore housing developments or sand/gravel operations near suitable habitat can coexist with the birds and still be productive.

The likelihood of a project providing suitable habitat for any listed species can be determined to a greater degree by experienced wildlife professionals. We can make site observations and use species range maps to compare suitable habitat to habitat in the project area. Regular visits to a project site may also be required to prove if a species is present or absent.

There are a variety of endangered or threatened species in the United States and these species can potentially affect a project. My colleague Buck Ray, a senior scientist based in Oklahoma City, also holds a USFWS Recovery Permit for multiple species, including endangered and threatened birds, bats, mussels, fish, and the American burying beetle. His permit allows him to work in multiple states in the Great Plains and Midwest.

“If you’re doing a project where you’re turning dirt, cutting down trees, entering a waterway, or impacting a wetland, you really should reach out to your friendly neighborhood biologist,” said Buck, who formerly worked at the Oklahoma Department of Wildlife Conservation.

I couldn’t agree more. Your friendly neighborhood biologist can help wildlife while helping to keep your project from getting stuck in the sand.