A renaissance in downtown Salina, Kansas

It’s a phenomenon that is all too familiar in many cities. Downtowns that were once the center of the community are now experiencing empty storefronts and public spaces, a lack of nightlife, reduced foot traffic, and few housing alternatives. As certain cities developed over time, growth patterns moved people farther away from downtown and that is the case in Salina, Kansas.

The Salina Downtown Vision 2020 Committee is a group of downtown property owners who are committed to bringing energy and economic vitality back to the city’s core. They retained the Olsson Studio to help create a vision and provide a comprehensive plan for revitalization and redevelopment efforts.

“There is a lot of opportunity in downtown Salina. It has a variety of historic architecture, a great framework of store fronts, competitive culture and arts presence, and longstanding community events and programs along with other assets,” said Ken Boone, team leader at the studio and project manager. “It’s all there but needed to be rediscovered and refreshed. Downtown Salina has great bones, but the committee needed a way to put meat on the bones and flesh out a great place.”

There was already momentum and excitement surrounding downtown revitalization but not necessarily consensus on what the future of the entire downtown should look like. That’s why stakeholder and community engagement was a critical step. 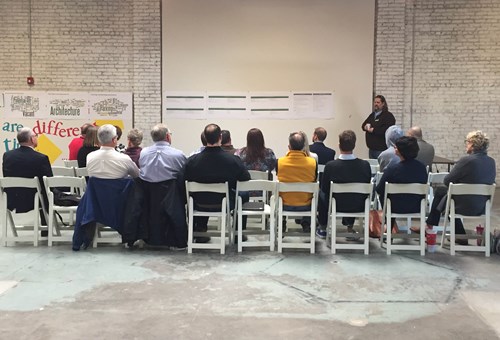 The studio led a series of engagement events throughout the project including two design charettes, a visioning workshop, a public open house, and a master plan presentation.

“The charette process and other engagement activities make sure the community’s wants, needs and desires are infused into the plan. We talked to stakeholders and residents, listened to what is valued, and then we get to be the pencil and bring that forward in drawing concepts and designing in real time,” said Ken. “If people see pieces of what they hold dear in the plan then we’ve built champions who will carry the plan and help move it forward.”

Salina Downtown Vision 2020 Committee members played an important role. They had the ability to engage with their own community and get the right people there as stakeholders and decision makers. Committee members really had the drive and energy to make it happen, according to Ken.

“The engagement part of the process is very comprehensive, and I was impressed by the high level of participation,” said Taylor Plummer, project planner. “Engagement created the buy-in and consensus needed to help drive the plan and provided a clear path for moving ahead.”

Several catalyst projects were already identified for downtown: a fieldhouse, automotive museum, family entertainment complex, a hotel, expansion and renovation of a historic theater, and an apartment complex.

“The vision committee didn’t want these projects to be islands with no meaningful links. This was an opportunity to think about redevelopment and revitalization differently, holistically. To look at projects not as a series of individual initiatives, but as an entire downtown,” said Ken.

Part of what the studio did was take these catalyst projects and spread the momentum across the entire downtown. Focusing on land use, infrastructure, transportation, aesthetics and quality of life, and revitalization and redevelopment opportunities, the studio developed a framework and specific and measurable recommendations to give the committee a roadmap of how to accomplish its vision.

“We looked for things that were missing and filled in the gaps. We made sure there was connectivity. People have a way to get from here to there, and when they get there, they have a reason to be there,” said Ken. “We had to find a way to capitalize on the potential and uniqueness of downtown Salina.”

The fact that this is a community-driven project versus a city-driven project makes it unique. The stakeholders, property owners, and the public created the vision for what they wanted to do and set the course.

“Implementation is the most critical piece. It is what makes the plan a reality. We laid out the strategy for full implementation of the plan, which included real and tangible recommendations that showed the next steps,” said Ken.

Implementation of the plan began shortly after its finalization. One of the catalyst projects, the fieldhouse, is already complete and is drawing community members and regional visitors. The Santa Fe Avenue streetscape enhancements are underway and so is the design of the new hotel.

“Revitalizing a downtown shows a willingness to reinvest in a community. It creates more sites to bring more people downtown, which in turn helps support local business owners and drive economic activity.

“We helped harness momentum, create a vision, and gave the client a roadmap to follow moving forward. Great things are happening in downtown Salina, and there’s much more to come,” Ken said.

Editor’s note: This project was the winner of the American Planning Association’s (Missouri Chapter) 2017 Outstanding Plan award and the winner of Olsson’s Project of Distinction award.