A High-Stakes Fight to Protect a Water Supply

Ben Day will never forget the moment he stepped into a full-blown public works crisis.

As he entered the Lincoln Water System’s control center, on Sunday, March 17, he saw about a dozen city employees engaged in a high-stakes fight. Not far away, an unrelenting churn of floodwater had blown the banks of the Platte River and now threatened to cut off drinking water to all 285,000 residents of Lincoln, Nebraska.

As a water/wastewater engineer for Olsson who had worked alongside the City of Lincoln for years, Ben had been inside the secure control center many times. But never like this.

He scanned the bank of video monitors, recognizing images of valves and pump machinery. But that noise … what was beeping?

“It was pretty surreal – the alarms going off,” he said. “It was clear, something wasn’t right.”

The next four days would be unlike anything he had experienced in more than two decades as a professional engineer.

The emergency began unfolding March 12 when Nebraska was struck by a bomb cyclone, the popular name for a storm triggered by a rapid plunge in barometric pressure. The drop recorded in Nebraska was comparable to a category 3 hurricane, and it unleashed destructive winds, a crippling blizzard in the western half of the state, and heavy rains in the east.

The volume of rain over the next three days wasn’t as problematic as the timing. A severe winter had piled snow upon the landscape and frozen the soil more than a foot beneath it. Frigid temperatures in the weeks preceding the storm had left creeks and rivers engorged with ice. Nothing slowed a massive runoff generated by up to 3 inches of rain and rapidly melting snow. As a result, several major drainages in central and eastern Nebraska flooded simultaneously. 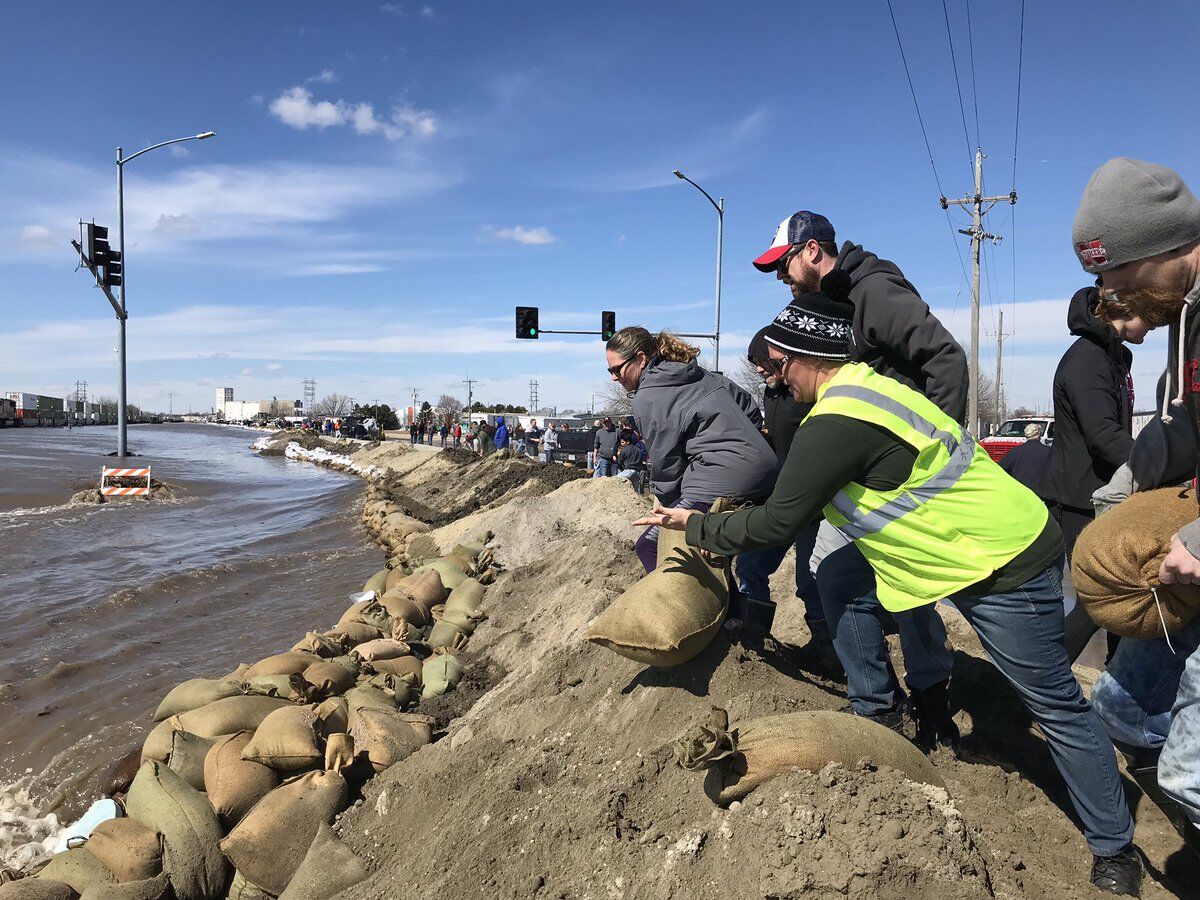 The torrents killed four people in Nebraska, plus one in western Iowa. Flooding forced the evacuations of entire communities, damaged thousands of homes and hundreds of businesses, and held Fremont – a city of 26,000 – virtually hostage for four days. Ice and water swept away livestock, adding drowned cattle to those killed by the blizzard.

No fewer than 17 flood records were set in the region, including on the Missouri River. As levees failed, water damaged or destroyed close to 200 miles of highway, nearly 30 state bridges, and scores of county roads. As if Nebraska had been cast back to the Pleistocene, freakish ice flows in the Niobrara River Valley nearly obliterated everything in their path, including a hydroelectric dam near Spencer. 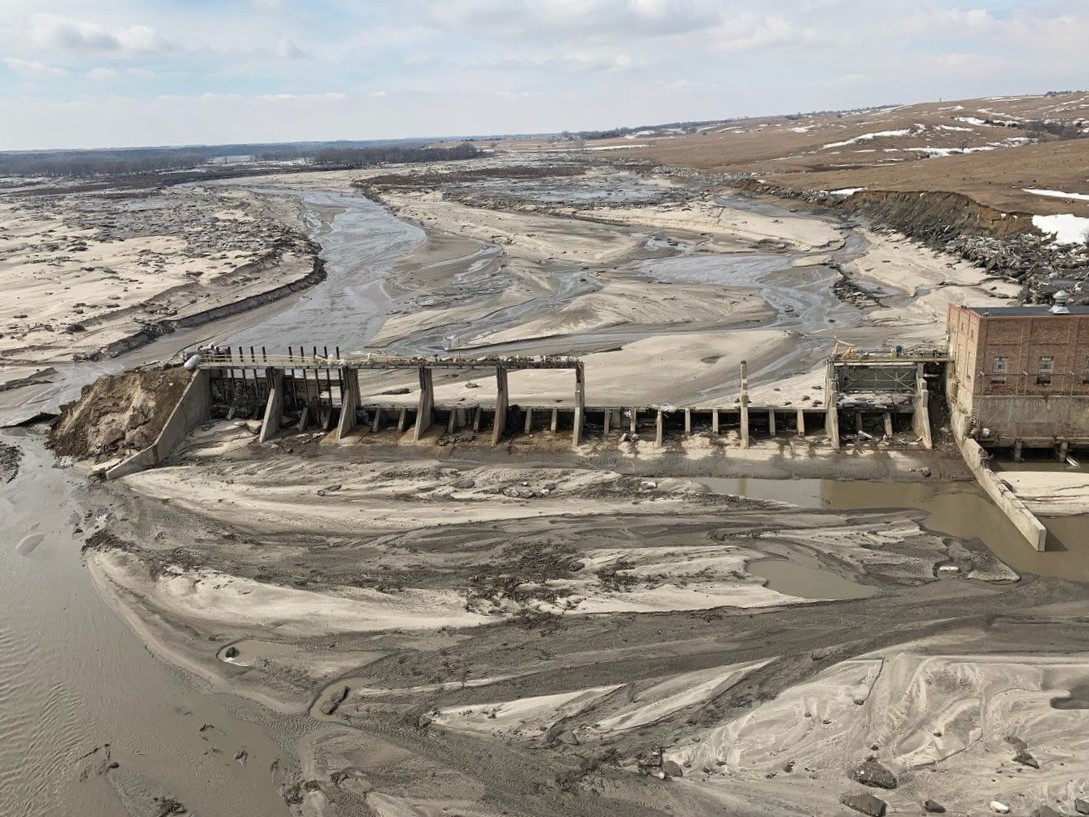 The storm racked up a staggering $2.6 billion in damage. Gov. Pete Ricketts has called it the most widespread natural disaster ever recorded in Nebraska.

By Saturday, March 16, floodwater had flushed down tributaries to the lower Platte River. The frequently shallow Platte swelled to a depth of 24 feet, breaking a record that had stood since 1997, the Omaha World-Herald reported. The peril confronting Lincoln’s drinking water system prompted the Nebraska Army National Guard to drop sandbags via helicopter near the city's wellfields. But the floodwater kept rising. 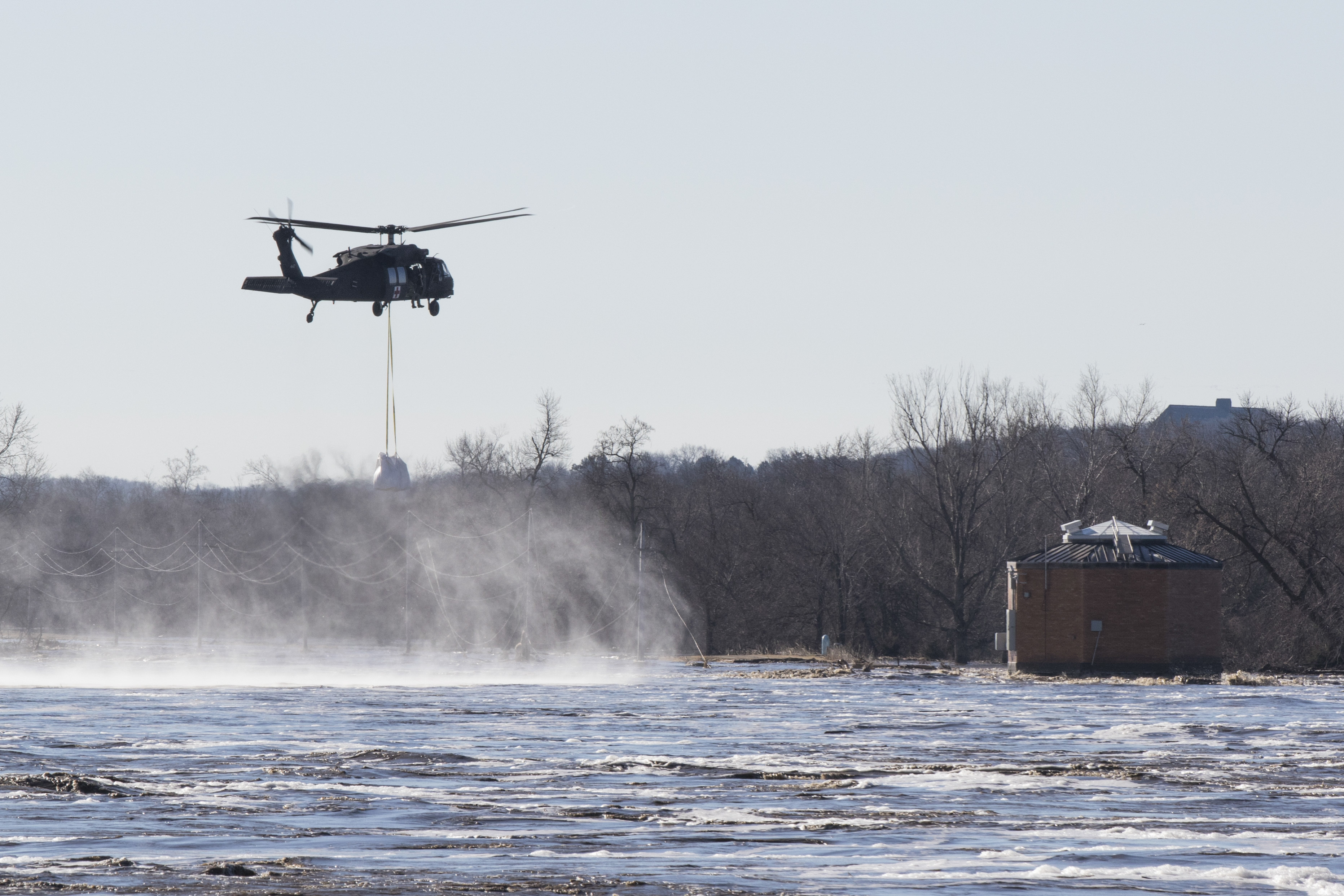 A Nebraska National Guard helicopter carries sandbags to a pump house at the City of Lincoln’s well fields.

That morning, public works officials asked Ben, along with other outside consultants and contractors, if they would be willing to help.

For decades, Olsson has worked in partnership with the city where our firm was founded. The relationship involves work on many water-related projects, including the wellfields along the Platte River near Ashland, a small city about 30 miles northeast of Lincoln.

Lincoln draws water from clusters of vertical wells in what are referred to as the north and south wellfields. The city also operates four horizontal collector wells, three of which are on an island in the river channel, the fourth near the east bank. Underground mains transfer the water to two treatment plants in Ashland, before another network of mains pipes the treated water to Nebraska’s second-largest city.

Shortly after he was contacted, Ben participated on a conference call with engineers from the city, Black & Veatch, and HDR. He then contacted key staff at Olsson to make sure resources were ready to go.

Except with the river still raging, there was nowhere to go.

On Sunday, March 17, water kept rising after an upstream levee had failed. Soon, a road adjacent to the north wellfield was under water, Miki Esposito, director of the Transportation and Utility Department, would later tell the Lincoln Journal Star.

“That’s when it got really scary,” she said. 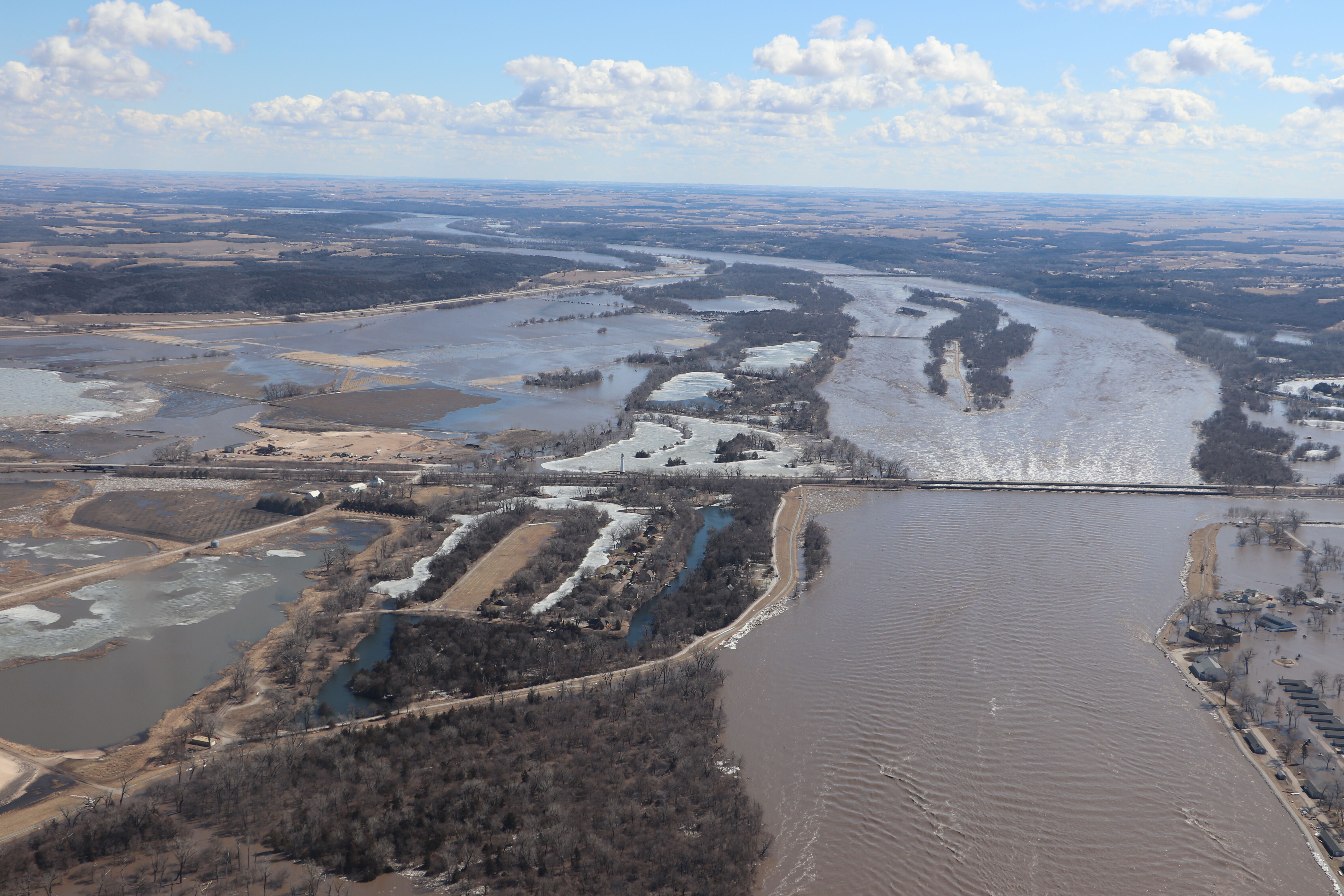 The Platte River floods at the Interstate 80 bridge, not far from the City of Lincoln's wellfields.

Throughout a beautifully sunny St. Patrick’s Day, Ben monitored reports that the river was still rising. Late in the afternoon, he contacted Derek Bookstrom, a utility contractor who frequently works on city projects, and they headed for Ashland.

“We had to get eyes on it to appreciate how severe it was,” Ben said.

They discovered several feet of water covering all roads leading to the wellfields. The flood had literally blocked all access by land.

The two headed to the control center. There they learned how intermittent outages had cut power to some wells over the previous two days, momentarily ceasing supply to the treatment plants.

The city had enough water in reserve to last a day or two, but without constant replenishment from the wells, the system could not meet Lincoln’s average seasonal demand of 35 million gallons per day.

As maintenance workers used kayaks to reach valves and keep some water flowing to the treatment plants, officials asked citizens to voluntarily reduce their water consumption. But the situation quickly worsened when pressure was lost in the transmission main.

On the night of March 17, Mayor Chris Beutler ordered mandatory water restrictions, which required citizens to cut their consumption by half and businesses by 25 percent.

Eyes on the damage

Early on Monday, March 18, city officials asked Ben and other consultants to inspect the horizonal well houses on an island in the river. Before long, Ben found himself in an airboat that carefully navigated acres of slack water pooled over access roads.

Upon reaching the island, they inspected two pump houses and determined they had not been flooded. The third well also showed no obvious signs of damage. But the route to the fourth horizontal well, on the south end of the island, was blocked by treacherous current. The team headed back.

Meanwhile, the city focused on making emergency repairs to damaged roads so utility crews could fix downed lines and restore power to all the wellfields. But they had to wait for water to recede.

On the morning of Tuesday, March 19, Ben stopped by the office before heading to Ashland. There he chatted with Roger Severin, Olsson’s former CEO and current board member, who offered to help engineers get another look at damage on the island. Roger lives in a lake development near the wellfields.

The next day, they boarded Roger’s personal boat and made the inspection. They saw that flooding had severely eroded part of the north well field, undercutting two supply mains and destroying a vertical well. The boat ride had yielded some valuable intelligence.

Gradually, the receding water revealed piles of sand covering access roads like snow drifts. All of it had to be pushed aside before gravel was brought in to support heavy utility trucks. By Thursday, March 21, downed and damaged power equipment had been repaired. 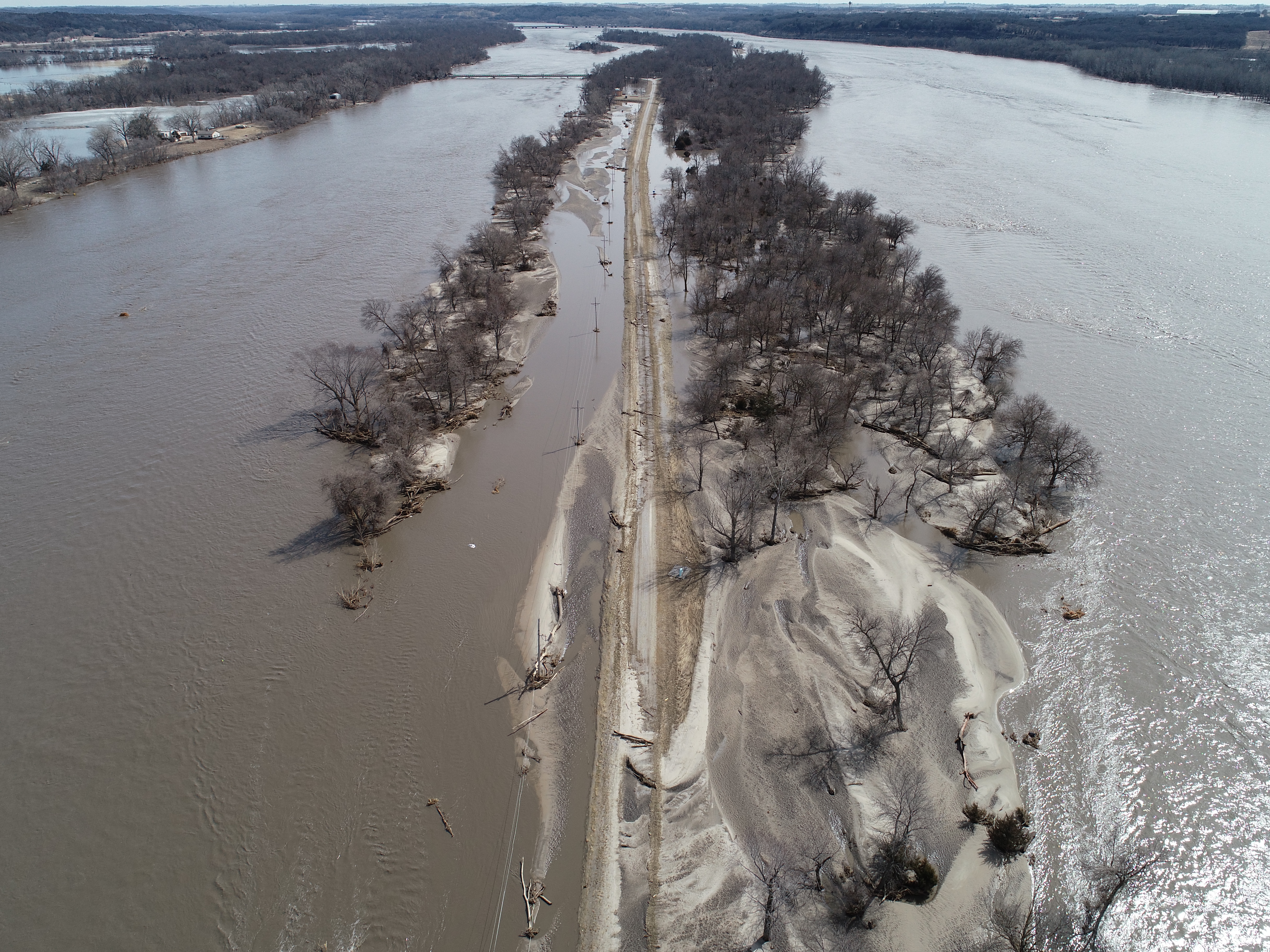 On the same day, Ben and about 30 others received a safety briefing from members of Nebraska Task Force One, a highly trained urban search and rescue team that deploys to major disasters across the country. The previous week, the team had rescued 10 people stranded by flooding.

That afternoon, Ben and others climbed into a National Guard helicopter and flew to the island to help restart two of the horizontal collector wells. Another team was able to restart one of the remaining horizontal wells, but the well on the north tip of the island still lacked power. Nevertheless, the city and its consultants had successfully restored 60 million gallons of capacity to the system, more than enough to meet Lincoln’s daily demand for water.

Meanwhile, Brian Jueneman, construction services manager for Olsson, directed contractors to clear access roads and fill wash outs at the south vertical wellfield. Those wells also returned to production, but a damaged main at the north vertical wellfield kept portions of the supply out of commission.

Lincoln residents once again had full access to a reliable supply of safe drinking water. All consumption restrictions ended. The crisis was over.

On Friday, March 22, the Lincoln Water System (LWS) submitted a preliminary cost estimate of $15 million to $17 million in damage and expenses to the Federal Emergency Management Agency.

Ben said he was very impressed with the capability and commitment of LWS staff, who kept the system functional under an extreme set of challenges. He mentioned Steve Owen, Donna Garden, Rick Roberts, Eric Lee, John Keith, and Corbin Harms, but said there were many additional public works staff who contributed to the effort.

“There was always a comfort level that they’ll figure this out,” he said. “You’re in a room full of professionals. Everyone knew what to do.”

And he was humbled to have played a role in helping a valued client-partner during an emergency.

“I had never expected to be a part of something like that,” he said. “You never really want to. I told them I felt honored they had called me and asked for assistance.”

“It meant a lot to me personally.”