A major part of the overhaul of the Southeast Community College (SCC) campus in Beatrice, Nebraska, is the addition of the Academic Excellence Center, a multidisciplinary learning space and gathering place. The three-story, $19 million project provides SCC students and faculty with modern general classrooms and state-of-the-art general and health science labs.

Olsson was brought into the project through the BVH Architecture team. Our work involved civil and structural engineering design for the 2-acre site and the facility, and construction administration for the entire project.

Site work included utility improvements, site demolition, pavement and utility construction, and grading. Our structural engineers led the design for the facility, which consisted primarily of structural steel framing with composite concrete elevated slabs and a braced-frame lateral system. The building is supported by conventional shallow, reinforced concrete spread and continuous footings. Most of the above grade structure was left exposed to meet BVH’s architectural intent of celebrating the building structure rather than concealing it.

Early construction packages were essential to the project’s success. To meet an aggressive construction schedule, our civil and structural teams condensed design schedules and issued early grading, foundation, and mill order packages months before any architectural drawings were issued. This scheduling allowed the contractor to begin site work and procurement while architectural drawings were completed.

Construction began in May 2019 and the project was completed in August 2020.

This project sets the standard for a new academic quad that is being established on campus and sets a high standard for energy performance for future buildings on campus. 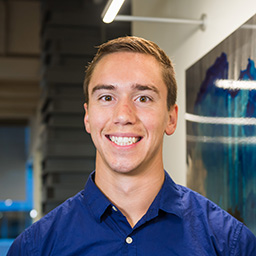