When the South Beltway in Lincoln, Nebraska, opens for traffic sometime in 2023, part of Olsson’s contribution to the $352 million project falls under the category, “out of sight, out of mind.”

That’s a good thing when you think about this portion of the work we’re providing for the project.

Olsson is providing nondestructive testing (NDT) for each butt weld used to erect the 3 steel bridges along the 11-mile freeway that connects U.S. Highway 77 to the west and Nebraska Highway 2 from the east. By the time the project is finished, our Lincoln NDT team will use radiographic testing to inspect more than 500 bridge beam butt welds made by Capital Contractors, Inc., making sure each one is up to code and safe for passing motorists.

Unless motorists know what to look for, this work is mostly hidden from the public’s eye. (For the record, we don’t recommend motorists try to spot our handiwork while they are behind the wheel, especially with traffic buzzing along at 65 mph.)

“We play a small role in the overall project, but we have a major role in the quality control of the steel girders used to build each bridge,” said Jessie Beach, team leader of the Lincoln and Sarpy NDT teams.

Olsson is involved with another aspect of the project as it relates to field work. The NDT team has been certifying welders from Hawkins Construction, the prime consultant for the entire project. No easy task, considering the number of welders it takes to erect 23 bridges along an 11-mile span of roadway.

Olsson’s involvement with bridge work may be small in scope, but the team will be dealing with large quantities of steel. Nearly 110 steel girders will be used for the steel bridges along the South Beltway; the longest girder is 169 feet, 1.25 inches and the heaviest tips the scales at 110,000 pounds. 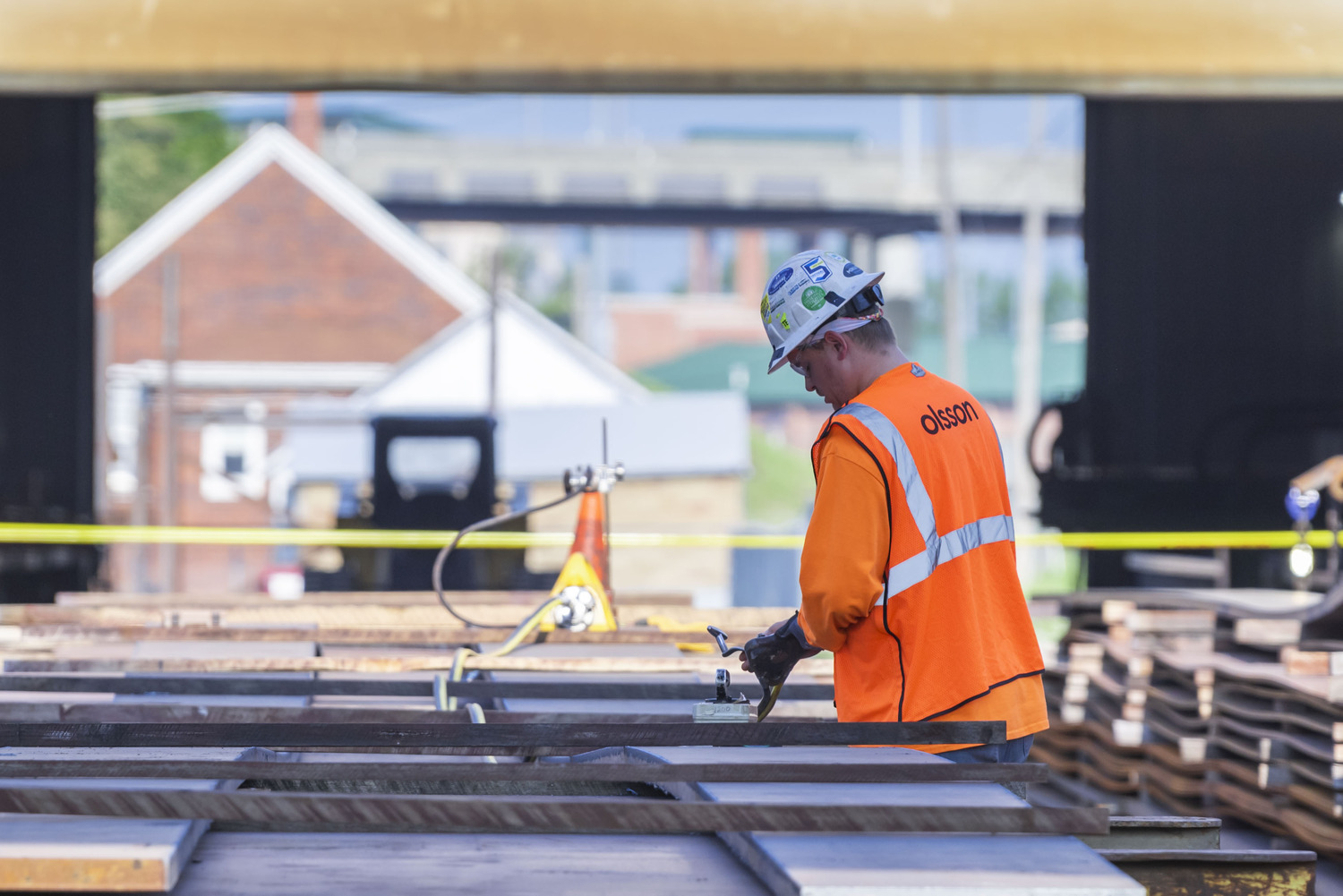 The South Beltway is important to residents of Nebraska’s capital city. The freeway will help ease congestion on Nebraska Highway 2 through the southern portion of the city by providing semitrucks a way to avoid city traffic. Nebraska Highway 2 is a four-lane, divided arterial that includes 15 traffic signals. Semitrucks account for about 20 percent of the traffic along Nebraska Highway 2.

Capital Contractors tapped Olsson to do the NDT work on the steel girders being used to construct the bridges along the South Beltway. Olsson is providing radiographic testing using X-rays on all full-penetration butt welds done to the steel girders.

The job for the Olsson’s NDT technicians working on the project is to make certain each weld conforms to the requirements of the American Welding Society D1.5 Bridge Welding Code.

“We’ve been working with Olsson for decades – for as long as I can remember,” said Chuck Sidles, owner of Capital Contractors. “We’ve had a long track record of great experiences working with Olsson, and they consistently produce quality work. This particular project is such a large-scale project in overall size and scope, and it requires some of the largest beams we’ve ever done. It was important to work with someone we know and trust.”

Capital Contractors has giant slabs of raw steel plate delivered via rail into its facility, which is located just north of Memorial Stadium in Lincoln. Sidles estimates about 9 million pounds of steel will be used for this project on just the three steel bridges.

Once the steel is in the facility, Capital’s fabricators will cut the plate into pieces to create the girders for the bridges. Due to the length of most of the girders required for the project, full penetration welds must be used to join or butt weld plates for the flanges and webs.  After the full penetration weld is completed, individual girder components must be independently tested and approved prior to integration into a finished girder. Typically, four flanges can be cut out of single slab of steel.

This is where Olsson’s NDT comes into play. 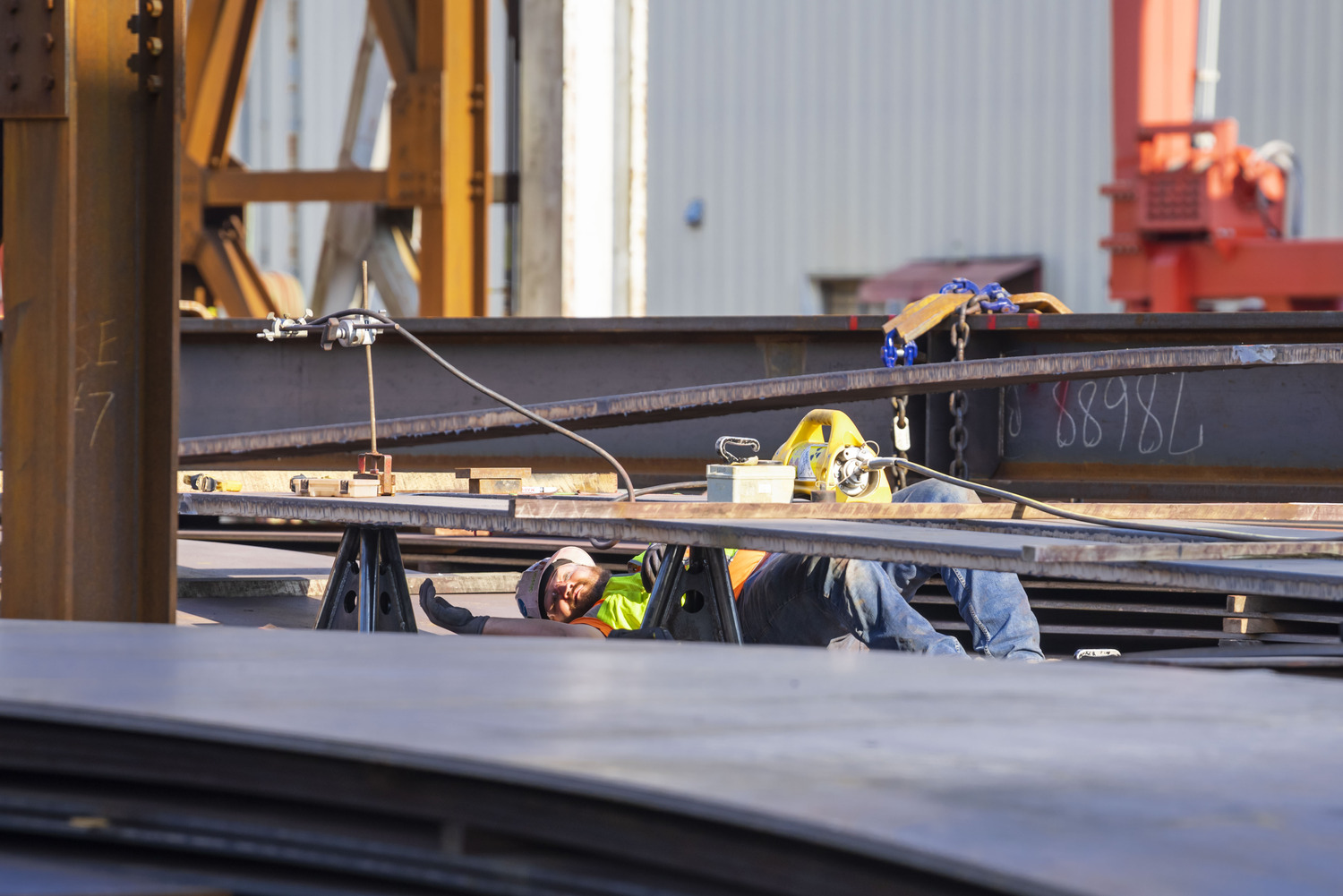 Fabricators then weld web members to the flange members to make the girder.

“Capital Contractors has its own in-house quality control function,” Jessie said. “They do the visual and magnetic particle testing on all the welds with their CWIs (certified welding inspectors). They also check the requirements for the camber of the steel girder.”

Once the South Beltway is completed and open to traffic, we will have made sure that the thousands of daily motorists have nothing to see. And that’s a good thing.