Gateway to a Striving Downtown in Northwest Arkansas

On a boulevard called Monte Ne Road, traffic flows like current in a stream.

Vehicles follow a gentle sweep of asphalt through mature neighborhoods on the east side of Rogers, Arkansas. Guided by a median landscaped in river sandstone, buffalo sod, and native plants, motorists slip through busy intersections on perfectly designed roundabouts. They pass cyclists and runners on a nearby recreation trail before arriving in a downtown brimming with brick streets, limestone-cased windows, and lots of possibility.

This is how a simple street project transports a community closer to its aspirations.

Except little was simple about the Monte Ne Road realignment. And that’s fine. At Olsson, we embrace complexity.

Officials with the City of Rogers came to us with a clear vision. They wanted more arterial and collector streets. They needed improved safety, less congestion, better aesthetics, and a dedicated pathway for pedestrians.

And they wanted traffic to flow so people could more easily reach an historic downtown striving to make itself new again.

“That was a focal point for the city, they wanted a gateway to the downtown,” said Christopher Brackett, a senior engineer and project manager in Olsson’s Fayetteville office.

Monte Ne Road emerged as the best candidate for a gateway corridor, but not as it existed. The narrow two-lane street cut a labyrinthine path through eastside neighborhoods, its multiple hard turns causing backups and threatening the safety of motorists.

We designed a ¾-mile realignment and expanded the street into a four-lane divided arterial. The design eliminated the dangerous turns, but the selected route cut through a residential area and would have to cross a ravine.

Our team completed extensive survey, easement, and right-of-way work to minimize disruption of the neighborhoods. And we identified a spot to cross the ravine using infill, a less-costly option than building a new bridge.

To address two busy intersections, we designed a pair of single-lane roundabouts with dedicated turning lanes. Relatively uncommon in Northwest Arkansas, the roundabouts allowed for smoother, safer traffic flow while the turning lanes made them more intuitive to navigate. 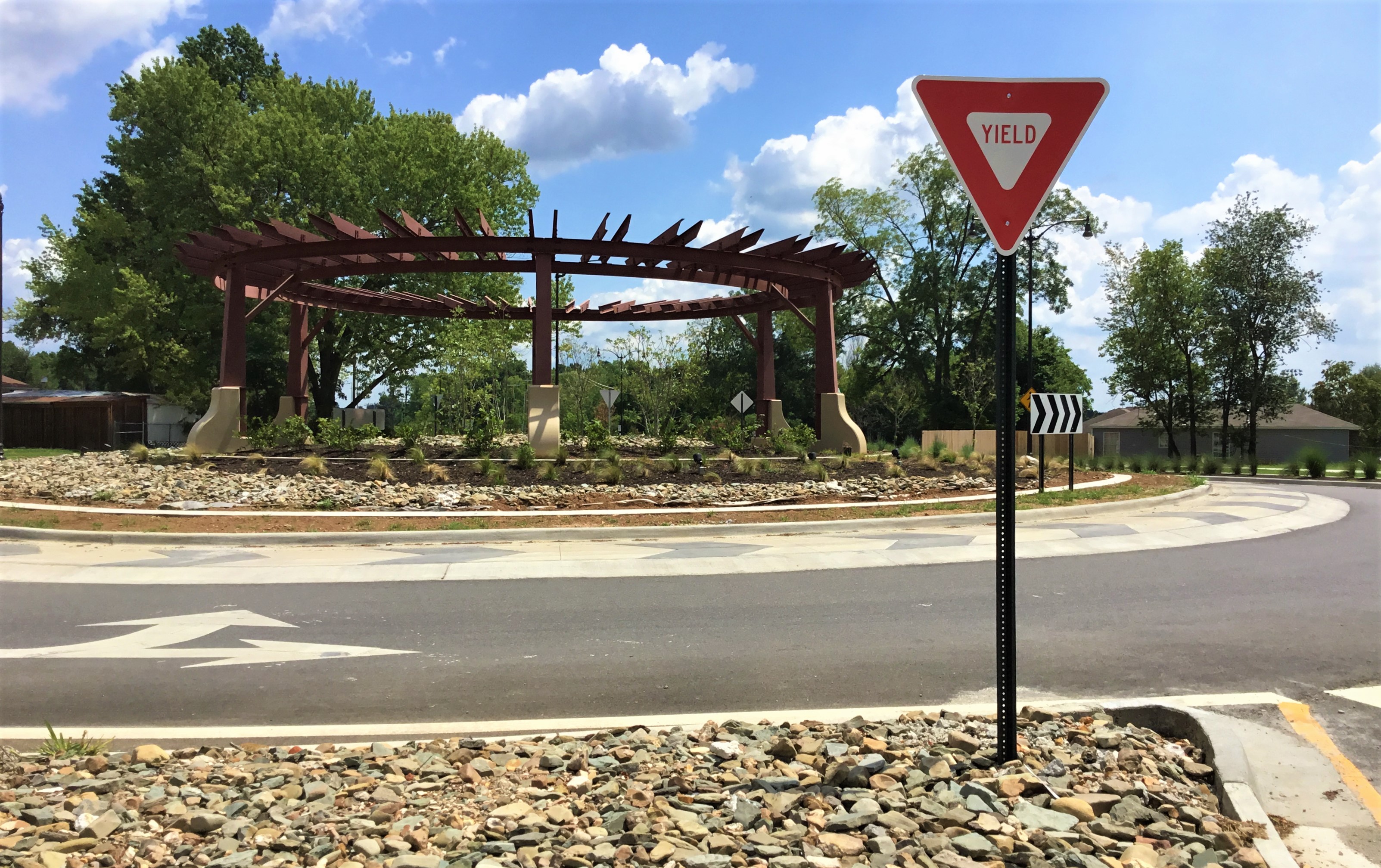 The project improved portions of several secondary streets, including transforming one intersecting street into a collector. We also designed a new railroad crossing while improving sidewalks, lighting, and parking at an adjacent city park.

Landscaping features beautified the medians and the heart of each roundabout. And the project included a paved recreational trail, part of a loop in Rogers that connects to the 36-mile Razorback Regional Greenway in Northwest Arkansas. We also designed a trail tunnel so pedestrians and cyclists could avoid crossing the busiest intersection along Monte Ne Road. 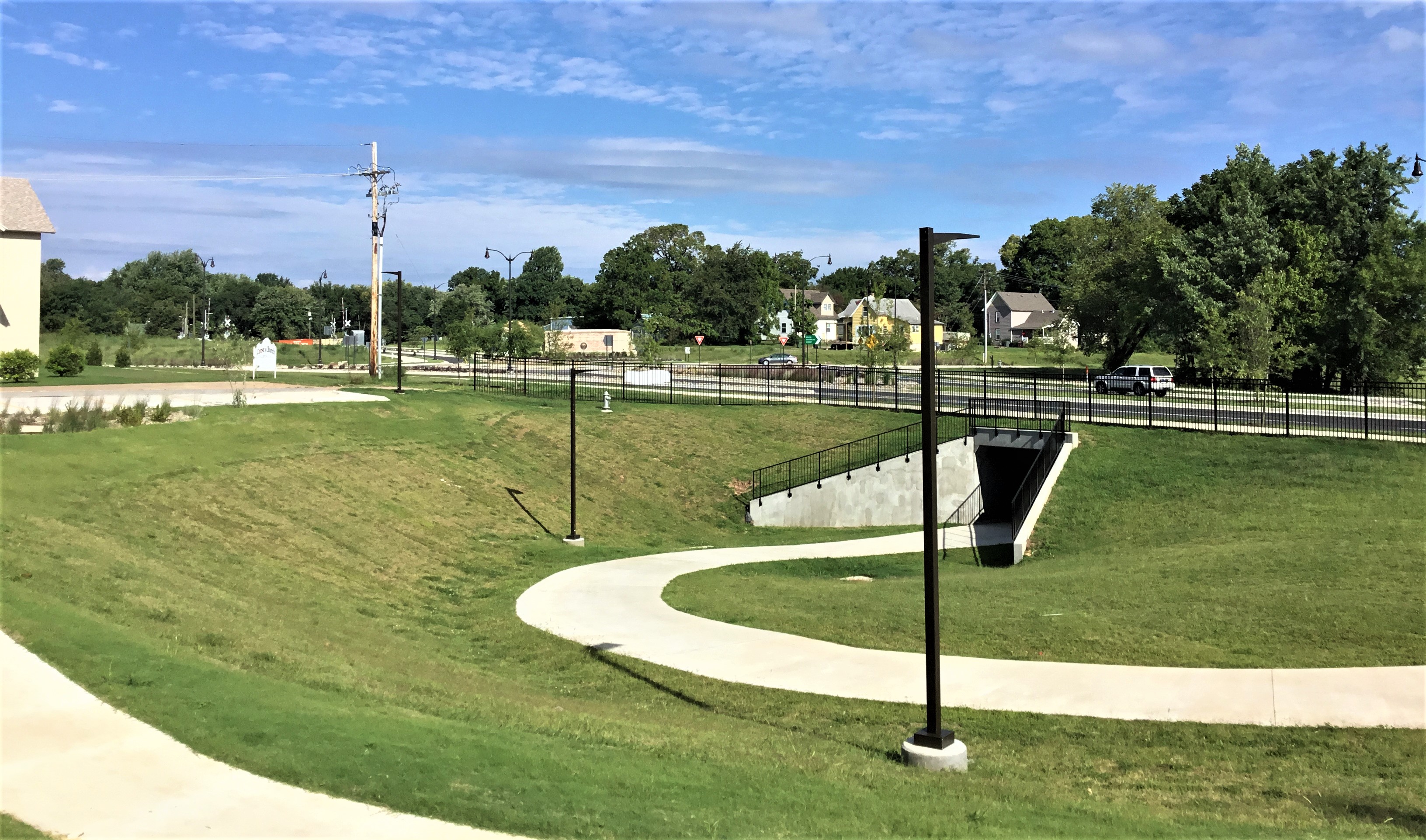 “We’ve had a lot of good response from people,” he said. “By putting the roundabouts in, traffic flows much better. It doesn’t back up the way it did. Much safer, too.”

By the end of the project, Rogers had an arterial, a collector, a path for pedestrians, and a gateway to its downtown. And we had the satisfaction of helping deliver a project worthy of the community’s slogan: “Where Possible Lives.”

“We’re super proud of it,” Christopher said. “It’s a great project and I’m glad we’re associated with it.”