The new Kiwanis Tennis Center in Tempe, Arizona, is so impressive that Sparky the Sun Devil just might trade his pitchfork for a racquet.

The public tennis complex features 15 courts surfaced with the same cushioned acrylic used by the Australian Open; a double-sided, 12-foot rebound wall for warm-ups; and a digital video system that can capture the action on every court.

The project has transformed the Tempe landmark where generations of Arizonans learned the game.

“We’re getting so much feedback from the tennis community that we hit a home run. Everything is first class,” said Larry Funk, Tempe’s tennis program director who helped oversee the improvements before his recent retirement

Installed in 1975, the former asphalt courts were cracked and warped from decades under a Sonoran Desert sun. Plus, the courts were packed side by side, making it difficult for spectators to get a close view of play.

With an eye toward a high-tech renovation, the City of Tempe put Olsson on its team. 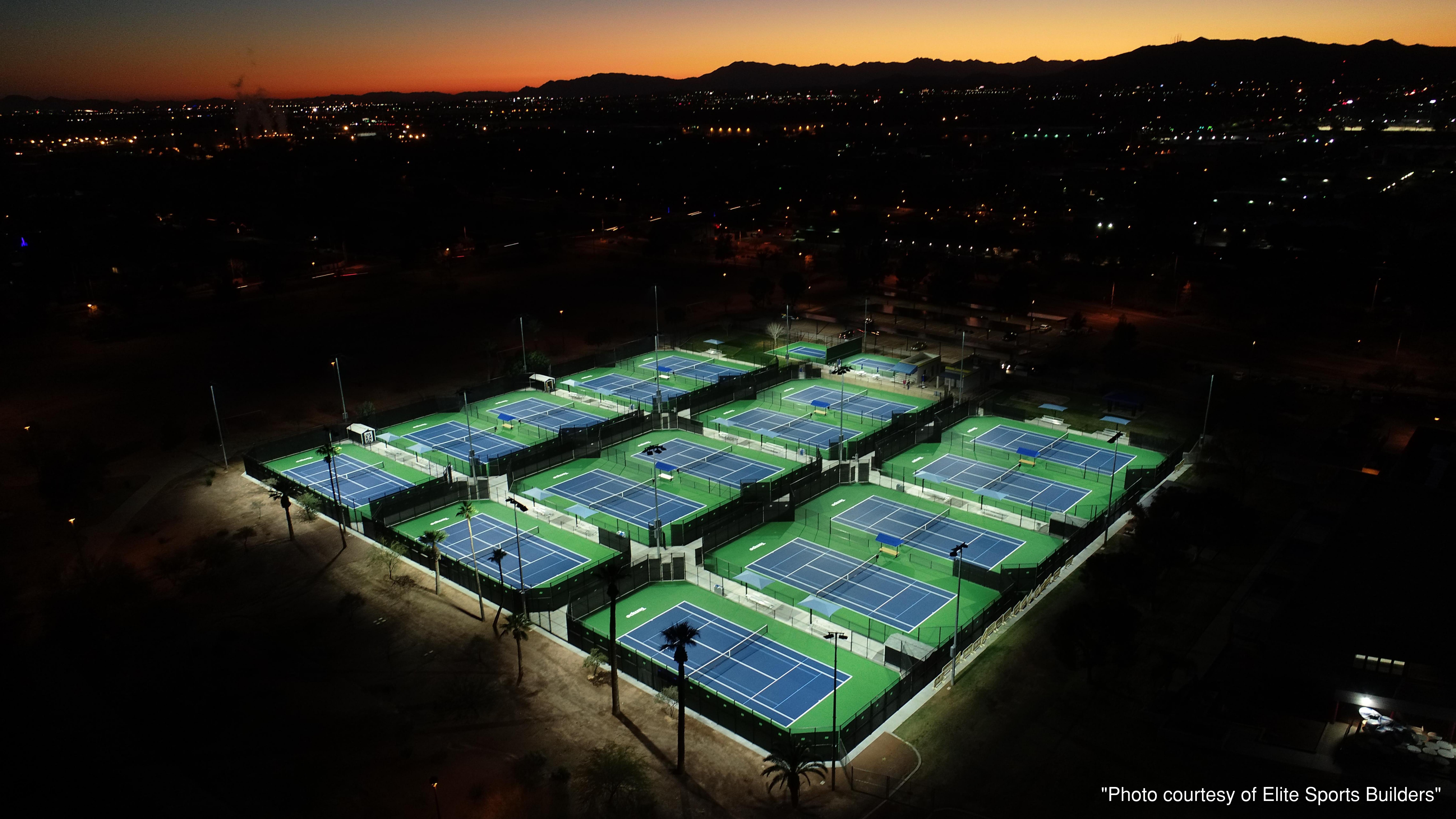 Our strong resume in the sports and recreation markets made us a smart pick. And we backed up our reputation by doing everything we could to make the $4.1 million project an unqualified success.

“Olsson was very responsive and helpful and easy to work with,” Larry said.

Our client wanted a combination of durability, function, and style.

For durability, we engineered post-tension concrete construction, which is key to reduced maintenance and extending the structural life of the courts to 50-plus years. The reinforcement technique greatly diminishes, or even eliminates, cracking. 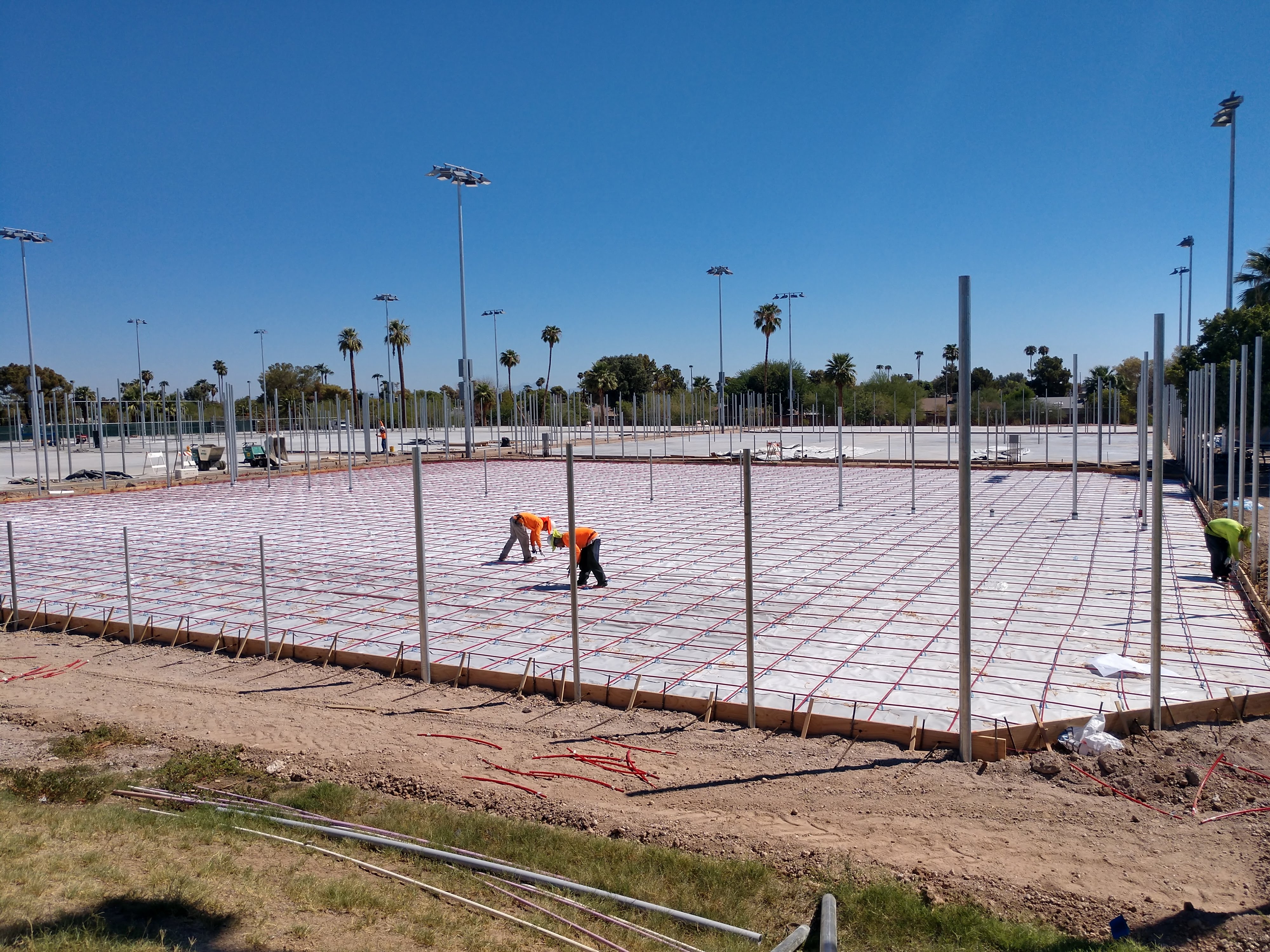 To address function, we incorporated additional space in our design for walkways and shaded spectator seating. Our clients identified the features as essential to their plan of hosting more programming, events and regional competitions at the center.

Our design also featured strategic fencing as requested by members of the local tennis community. We dropped the fence height along the middle of courts to improve sightlines and incorporated 45-degree “California corners” to help deflect errant balls back toward players.

We recommended other features, such as trench drains, quick coupler connections for easy cleaning, and weather-proof outlets for speakers and charging cell phones.

In a community where summer temperatures hit triple digits, many wait until sundown to play. We engineered an LED lighting system that required fewer poles yet still doubled the brightness on the courts.

Each court is equipped with Playsight Smartcourt camera technology, which provides both live-streaming and archived recordings of competition or practice sessions. The system doubles as a digital line judge to settle disputed calls.

Tempe currently has the largest tennis complex in the country with all courts connected to Playsight, Larry said. 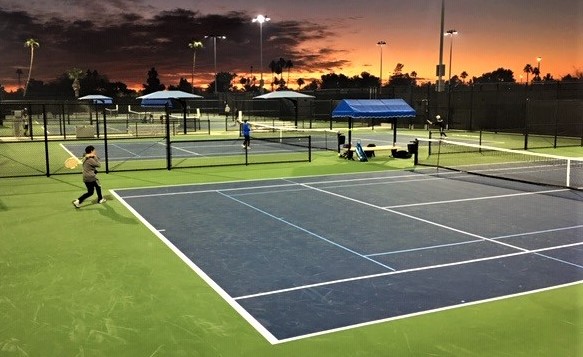 Players couldn’t wait to try it out. The tennis team at Arizona State University – home of the Sun Devils – hosted squads from three other universities within days of the center’s reopening.

The student athletes agreed. When it comes to public tennis projects, Tempe has won a grand slam.